CORDELE- Crisp County basketball held Senior Night on Saturday night when they hosted Wilcox County for late season, non-region contests. Wilcox County came up with the wins in both the girls’ and boys’ games.

Jelissa Reese opened the scoring in the girls’ game for the Lady Cougars, but the Lady Patriots went on a 9-0 scoring run shortly after with scores by Trajata Colbert, LeAunna Mahogney and JaMerical Marshall. Reese, Diamond King, and Alexis Henderson then put together a 6-0 scoring run to get the Lady Cougars within one point of the lead. The Lady Patriots finished the first quarter on a 9-2 run to take an 18-10 lead into the second quarter.

Wilcox County extended their lead in the second period by outscoring the Lady Cougars 11-6. The Lady Patriots got scores from Marshall, Marteisha Griffin, Karisma Whitfield and Alayshia Dixon in the quarter. Aaliyah Hardemon, Jelissa Reese and E’Lacious Holt each had two points in the period for the Lady Cougars. Wilcox led 29-16 at halftime.

The Lady Cougars put together an 11-1 run in the fourth quarter to bring the score closer, but the Lady Patriots picked up the win by a final score of 49-38.

Crisp County’s Jelissa Reese was the leading scorer in the game with 20 points, and she added nine rebounds. E’Lacious Holt finished with 10 points and three steals, and Diamond King grabbed 13 rebounds and scored four points.

The Patriots jumped out to an 8-3 lead in the boys’ game with scores from Desmond Tisdol, Keyshawn Howard and Cameron Patterson. Cougar seniors Alex Harvey, RJ Chambliss, TJ Ming, and Keishon Franklin all scored in the quarter, and Malik Hall knocked down a late three-pointer in the quarter to cut the Wilcox lead to 12-9 entering the second quarter.

The Patriots outscored Crisp 21-14 in the second quarter to extend their lead out to 10 points. Tisdol, Patterson, Howard, Azavion Deans, Demtric Young, and Jordan Brown all scored in the quarter for Wilcox. The Cougars got scores from Chambliss, Ming, Trey Griffin, Willie Poole, and Bread Armstrong in the second quarter. Wilcox took a 33-23 lead into halftime.

The teams traded scores in the third quarter up until the Patriots found themselves up by 15 about halfway through the period. The Cougars used a 12-4 scoring run to climb back into the game led by six points from Alex Harvey and a three-pointer by Malik Hall. Wilcox got a couple of late baskets in the third quarter from Brown and Tisdol to stretch their lead back out to 51-41 entering the fourth quarter.

Willie Moore opened up the fourth quarter with a layup for Wilcox, and Jordan Brown knocked down another three shortly after to get the Patriot lead back up to 15 points. KJ Williams, RJ Chambliss, and Alex Harvey then led the Cougars on a 6-0 scoring run to cut the Wilcox lead down to nine. The teams traded scores for the next few minutes, and the Cougars were able to cut the Patriot lead down to four after a TJ Ming layup at the 1:30 mark of the fourth quarter.

Wilcox got back up by seven with less than a minute to play after scores by Keyshawn Howard. Alex Harvey then scored with just over 30 seconds remaining in the game to make the score 68-63 in favor of the Patriots. Chambliss then hit a couple of important free throws after a turnover by Wilcox to pull the Cougars within three points with just 24 seconds left to play.

The Cougars forced another turnover and got the ball back with a chance to send the game into overtime with a three-pointer but they could not get a shot to fall,and Desmond Tisdol made a layup with a couple of seconds remaining to finish the game off for a Wilcox win. The Patriots won by a final score of 70-65.

Tisdol led the Patriots with 22 points, and Jordan Brown was next with 18 points. Keyshawn Howard finished with eight, and Willie Moore had seven points.

After Tuesday night games at Dougherty County, the Crisp County teams will finish up the season with big region games in Albany versus Monroe on Friday night.

Wilcox County will finish up the regular season with home games Friday night against Irwin and away games at Turner County on Saturday after their important region games against Clinch County on Tuesday night. 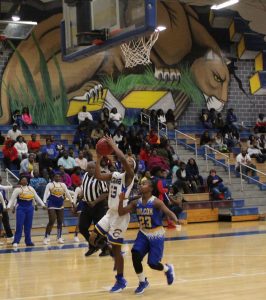 Jelissa Reese goes in for a layup as Marquetta Griffin defends. 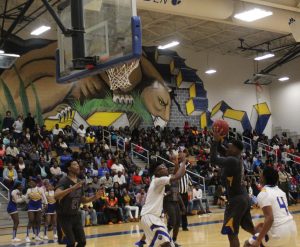 Desmond Tisdol splits the Cougar defense as he goes in for a score.