ALBANY- The Crisp County basketball teams traveled to Albany on Tuesday night to take on Dougherty County. The Lady Cougars and Cougars battled until the end in their contests, but Dougherty came up with the win in both games.

The Lady Trojans opened the second quarter on an 8-2 scoring run to retake the lead at 19-16. Jelissa Reese hit a three-pointer for the Lady Cougars shortly after to tie the score. After a couple of scores by Dougherty County, Aaliyah Hardemon knocked down her third three-pointer of the night, and E’lacious Holt hit two free throws to put Crisp in front 24-23 late in the second quarter. The teams traded scores for the remainder of the period, and Dougherty led 29-28 at halftime.

Reese and Hardemon led the Lady Cougars on a 7-2 scoring run to open the second half. Dougherty answered with a 10-0 run to close out the quarter with a 42-35 lead.

The Lady Trojans extended their lead to 49-37 after going on a 7-2 scoring run to start the final period. Reese and Holt pulled the Lady Cougars back to within striking distance with a quick 6-0 run. Crisp then cut the lead to five after a three-pointer from E’lacious Holt.

Reese and Janiah White tacked on scores for the Lady Cougars late in the quarter, and they were able to pull back to within four points of the Dougherty lead, but the Lady Trojans were able to finish the game off after a few scores in the final minute of the game. Dougherty won by a final score of 59-50.

Jelissa Reese finished with 21 points to lead the Lady Cougars, while Aaliyah Hardemon had 16 and E’lacious Holt ended up with seven.

Dougherty opened the scoring with a free throw in the boys’ game. Ty Mckenzie gave the Cougars a brief lead shortly after with a layup. KJ Williams, RJ Chambliss and TJ Ming all got in on the scoring for Crisp to lead them to a 12-10 lead late in the first quarter, but the Trojans scored the last five points of the period to take a 15-12 advantage into the next quarter.

After Dougherty extended their lead out to 19-12, Malik Hall and KJ Williams each hit a three-pointer for the Cougars to bring the Dougherty lead down to one-point. The teams swapped scores for the next couple of minutes until Hall hit another three to tie the score at 25 apiece. The Trojans then went on a 10-0 scoring run to finish the first half with a 35-25 lead.

The Cougars put together a decent scoring run to get back into the game at the beginning of the second half. Alex Harvey scored the first points of the third quarter to bring the Trojan lead down to eight, and KJ Williams began to heat up by hitting three three-pointers during the run. Chambliss and PJ Coleman also scored during the run to help the Cougars cut the Dougherty lead to 43-39 about halfway through the third quarter.

The Trojans responded with a 10-0 scoring run sparked by their big man, Carlos Curry. Chambliss got a bucket and a free throw shortly after, and Alex Harvey hit a three with just a few seconds left to play in the quarter. The Trojans led 55-45 at the end of the quarter.

Dougherty picked up the first two points of the fourth quarter, and KJ Williams answered with his fifth three of the night shortly after. Ty Mckenzie and TJ Ming then scored to pull the Cougars within six points at 57-51 in favor of the Trojans.

After the teams traded scores for the next several minutes, Dougherty County was finally able to pull away again. Chambliss and Harvey scored several more points for the Cougars in the last couple of minutes, but the Trojans finished the game with the win by a final score of 77-63.

Chambliss was the leading scorer for the Cougars with 20 points. Williams finished with 17 points, and Alex Harvey also finished in double figures with 10.

Crisp County will finish up the regular season in Albany with games at Monroe starting at six on Friday night. 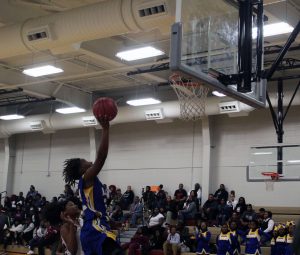 Jelissa Reese goes in for a layup. 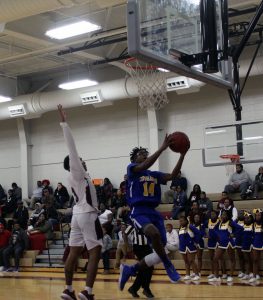 RJ Chambliss beats his defender and scores for the Cougars.