ALBANY- The Crisp County High School basketball teams closed out the regular season on Friday night with region games against Monroe High School in Albany. The Lady Cougars pulled out a comeback victory after trailing by as many as nine in the third quarter in their game, while Monroe escaped with a narrow win over the Cougars in the boys’ game.

Monroe had the lead in the girls’ game at the end of the first quarter with a 19-14 advantage. Jelissa Reese scored eight points in the quarter for the Lady Cougars, while Diamond King, Alexis Henderson and Janiah White all pitched in with a basket each.

Reese and Aaliyah Hardeman opened the second quarter with scores to get Crisp within one point of the lead, but Monroe countered with a 6-0 scoring run to pull back ahead by seven. A three-pointer by Hardeman capped an 11-5 scoring run for Crisp to bring the score to 30-29 in favor of Monroe late in the second quarter. The Lady Tornadoes scored the final four points of the half to take a 34-29 lead into the halftime break.

King opened the scoring in the second half with a layup to cut the Monroe lead to three, but the Lady Tornadoes scored the next six points to extend their lead out to nine. The points would prove to be the only ones in the third quarter for Monroe, as the Lady Cougars went on an 18-0 run to close out the quarter from there. Reese scored eight of the 18 points during the run, while Hardeman helped out with two three-pointers during the stretch. Henderson and E’lacious Holt both scored during the run as well, and the Lady Cougars led 49-40 at the end of the quarter.

Scores by Reese and Henderson extended the Crisp lead to 13 at the start of the fourth quarter. Holt and Janiah White got in on the scoring shortly after by knocking down some free throws. Monroe cut the Crisp lead down to eight late in the quarter, but the Lady Cougars were able to hang on for a big region victory by a score of 66-57.

The Cougars opened the boys’ game with an 8-2 lead after scores by TJ Ming, Trey Griffin, and a three-pointer from the top of the key by KJ Williams. Monroe closed the gap over the next few minutes, but another three from Williams and a bucket by Bread Armstrong kept the Cougars in front 13-12 at the end of the first quarter.

Monroe took the lead with the first score of the second quarter, but KJ Williams gave the Cougars the lead back shortly after with a jump shot from mid-range. Alex Harvey then connected on a three-pointer to put Crisp ahead by four. Monroe countered by scoring the next seven points to go ahead 21-18.

Williams forced a Monroe turnover shortly after, and then assisted Harvey for his second three of the game to tie the score at 21. A layup by Ty Mckenzie put the Cougars in front by two, and the teams then traded scores for the next couple of possessions. Harvey hit his third three of the night late in the second quarter to give the Cougars a two-point lead but Monroe tied the score just before the buzzer. The teams entered halftime with the score tied at 28-28.

The Tornadoes pulled ahead by eight early in the fourth period but the Cougars were able to fight their way back into contention. Coleman and RJ Chambliss combined for 10 points over the next several minutes to get the Monroe lead down to 56-55, and KJ Williams subsequently gave the Cougars the lead with a pull-up jumper from mid-range. A TJ Ming dunk then put Crisp County ahead 59-56 with 3:38 remaining in the game, but the Tornadoes finished the game on a 10-3 run to escape with the region win by a final score of 66-62.

KJ Williams led the Cougars with 14 points, and Alex Harvey was next with 13 while PJ Coleman and RJ Chambliss each finished with nine. Other scorers: TJ Ming- 6, Trey Griffin- 5, Bread Armstrong- 2, Ty Mckenzie- 2, Willie Poole- 2. 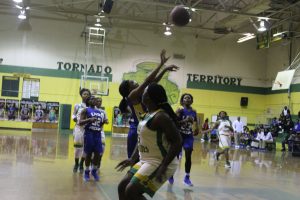 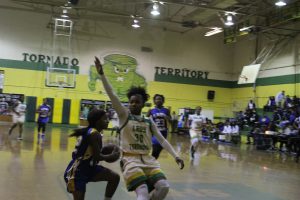 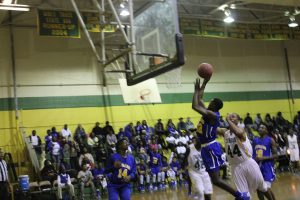