ASHBURN- The Wilcox County basketball teams closed out their regular season schedules with region games against rival, Turner County on Saturday night. The Lady Patriots and Patriots came away with the victory in both games.

The Lady Patriots pulled away in the second quarter by outscoring Turner County 16-7. Colbert, Montgomery, Marquetta Griffin, Marteisha Griffin and Alayshia Dixon all scored for Wilcox in the quarter. Office and Mya Byrd scored for Turner in the period. Wilcox led 28-13 at halftime.

Colbert scored 12 points in the third quarter to lead the Lady Patriots to a 54-20 lead going into the fourth quarter. Marshall and LeAunna Mahogney also chipped in with scores in the quarter.

Turner outscored Wilcox 9-8 in the fourth quarter to finish the game. Dixon and Karisma Whitfield did all of the scoring for the Lady Patriots in the quarter. Wilcox County won by a final score of 62-29.

Turner County opened the boys’ game with a 9-4 run led by Demarcus Barnes and Keonvay Clark. Turner led 11-10 late in the quarter, but Keyshawn Howard hit a three at the buzzer to put the Patriots ahead 13-11 going into the second period.

Desmond Tisdol, Demetric Young, Cameron Patterson, Azavion Deans and Howard all scored in the second quarter for the Patriots. They stretched their lead out to eight about halfway through the period, but Qwontravius Lawson made some big shots to help the Rebels close the gap down. The Patriots led 26-24 at the end of the first half.

Willie Moore got a bucket and a free throw to start the second half for the Patriots. Turner countered shortly after with a couple of scores to bring the Wilcox lead back down to two, but Demetric Young scored eight straight points for the Patriots to lead them on an 8-2 scoring run. A shot just before the buzzer from TJ Burgess pulled Turner back to within five points of the lead going into the final period. Wilcox entered the fourth quarter with a 39-34 lead.

The teams swapped scores during the first three minutes of the fourth quarter until Wilcox brought their lead out to nine points after a three-pointer from Jordan Brown plus an and-one from Azavion Deans. Tyler Moore and Demarcus Barnes scored several times to get the Rebels back within five points late in the quarter, but the Patriots made some crucial free throws down the stretch to finish the game off for the win by a final score of 61-50.

Up next for the Wilcox County teams is the region tournament, which started Monday night with first round games between the lower seeded teams. The Lady Patriots finished the regular season tied for first place in the region, so they will not play until the region semifinals on Friday night in McRae. The boys finished as the three seed behind Clinch and Lanier and they will play Wednesday night in Ashburn against the winner of Tuesday’s second round matchup between Turner and Charlton. 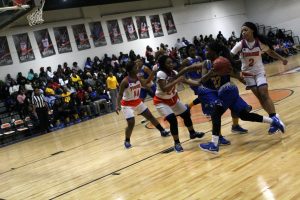 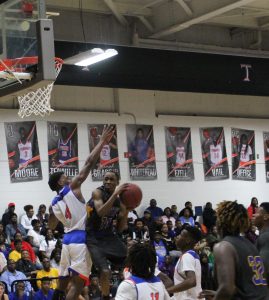