Quay Walker made the decision to sign with UGA over several other big named schools, including Tennessee, Auburn and Alabama. Quay finished his career at CCHS with 185 total tackles (29 for a loss of yards), nine sacks, four forced fumbles, an interception and one defensive touchdown. He finished with solid numbers on offense as well, with 31 catches for 530 yards and seven touchdowns. The Georgia Coaches Association recently named him GHSA AAA defensive player of the year.

Jahlil will be attending the University of North Carolina to play college ball. Jahlil played on the offensive and defensive line for the Cougars and put up some great stats throughout his career. He had 181 total tackles (33 for loss of yards), seven sacks, four fumbles caused and one fumble recovery. Coach Harber had high praise for Jahlil and his effort on the field, but also his work in the classroom.

“He had a great senior season no doubt, but he also took care of his classwork and academics as well,” said Harber.

Punter/Kicker Adam Posey signed to play at Kennesaw State University. Posey averaged over 37 yards per punt over the past two seasons with a career long punt of 59 yards, and 21 punts downed inside the opponent 20-yard line. He took over as the placekicker and kickoff specialist this season and made 46 out of 52 PAT attempts and three out of five field goal attempts. Posey was named the GHSA region 1-AAA specialist of the year in December.

Adarious Armstrong signed for Georgia Military College. This past season was his first year of high school football at CCHS and he was a big part of the Cougar defense. He finished the season with 41 total tackles, four interceptions, three fumble recoveries and eight pass deflections. He also pitched in on offense with six catches for 123 yards and two touchdowns. Adarious was also selected to the GACA AAA all-state first team. 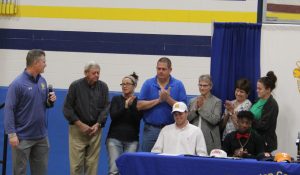 Adam Posey with his family and coach Harber.

Adarious Armstrong signs as his family looks on.

Jahlil Taylor speaks to the crowd before signing.

Quay Walker shakes hands with coach Harber after announcing his decision to go to UGA. 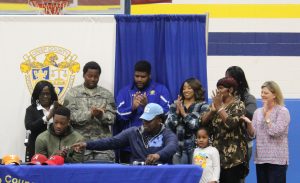