Offensive/defensive lineman Chad Thomas signed to play at Middle Georgia State in Macon. Thomas played a key role in the Dooly offensive production this season with some solid blocking, while also contributing on defense with 17 total tackles.

Receiver, Desi Lester Jr. signed to play for the East Tennessee State University Buccaneers. He finished his senior season with 60 receptions for 1036 yards and 14 total touchdowns. On defense, Lester finished the season with 27 total tackles and one interception.

Travis Glover was the final Bobcat to sign on the day. The offensive lineman picked Georgia State University over a few other offers. He was a big factor for Dooly County this year as an offensive lineman, and he added nine tackles on the defensive side of the ball. 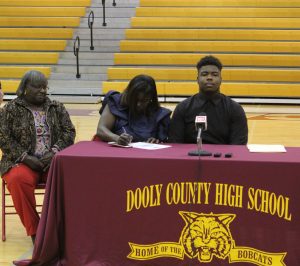 Chad Thomas with his family. 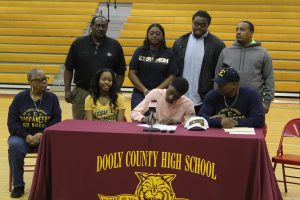 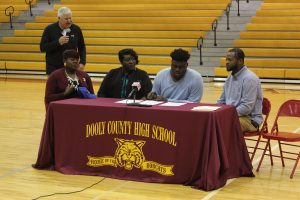 Travis Glover with his family and Coach Jimmy Hughes.