ASHBURN- The Wilcox County Patriots defeated the Turner County Rebels for the third time this season in the region 2-A quarterfinals on Wednesday night.

Turner County put together a run to close the Patriot lead down slightly over the first few minutes of the second quarter. Jordan Brown completed a four-point play for Wilcox late in the quarter after getting fouled while shooting a three-pointer. Tuner closed the quarter with a 9-2 scoring run with scores from Barnes, Taydrain Sanders and Aletan McKinney. The teams entered the halftime break tied at 30.

The Rebels briefly took the lead after Jaman Morris opened the scoring in the third quarter. The Patriots took the lead shortly after by using an 8-0 run with six points from Tisdol and two from Brown. The teams traded baskets for the next couple of minutes until six straight points from Sanders gave the Rebels a 45-44 lead with less than a minute to go in the third period. Several hard fouls between the rival teams led to the quarter finishing with a few free throws after a technical foul was assessed to each team with just a few seconds remaining in the third. Wilcox held on to a one-point lead at 48-47 going into the fourth quarter.

Sanders, Barnes, and Keonvay Clark led Turner on a quick scoring run to take a 54-52 lead about halfway through the final period. Howard, Brown and Willie Moore all scored over the next couple of minutes to help Wilcox retake the lead 59-54 with less than three minutes remaining in the game. Tisdol finished the Rebels off from there with 10 points over the last couple of minutes. The Patriots defeated Turner by a final score of 68-61.

Turner County center Taydrain Sanders finished with 21 points to lead the Rebels, while Demarcus Barnes and Tyler Moore were both in double-digits as well, with 13 points and 11 points respectively.

Desmond Tisdol led the Patriots in the game with 24 points. Demtric Young was the only other Wilcox player in double-figures with 11 points, while Willie Moore finished with eight points. Other Wilcox scorers: Keyshawn Howard- 7, Jordan Brown- 7, Azavion Deans- 7, Cameron Patterson- 4. 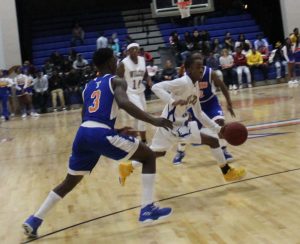 Jordan Brown splits the Rebel defense as he drives to the basket. 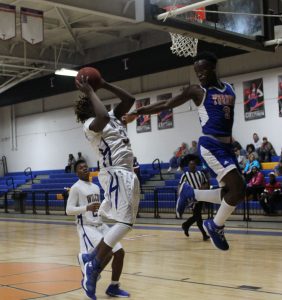 Azavion Deans attempts a layup as Tyler Moore defends for the Rebels. 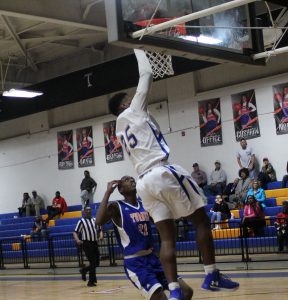 Desmond Tisdol gets behind the Turner defense for a score.