ADEL- The Crisp County Cougars traveled to Adel Thursday night for another matchup with Cook County with a spot in Friday’s region championship on the line.

RJ Chambliss got the Cougars on the scoreboard first just after the opening tip with a layup on an assist from KJ Williams. The Hornets scored the next four points to take the lead, but TJ Ming then scored off of an assist from Alex Harvey to even the score back up. Cook County then knocked down a three-pointer, but Williams knotted the score back up with a three of his own. A 9-2 scoring run by the Hornets gave them a 16-9 lead late in the quarter. Quay Walker scored a couple of late buckets in the period to bring the score to 19-13 in favor of Cook going into the second quarter.

Early second quarter scores by Chambliss and Ming added with a dunk by Walker shortly after helped the Cougars get back to within three points of the Hornet lead. The Hornets finished the quarter on a 10-3 scoring run to take a 33-23 lead into the half.

Cook County stretched their lead out to fourteen points early in the second half, but the Cougars pulled themselves back within reach over the next several minutes during the third quarter. Bread Armstrong started the Crisp County scoring run when he knocked down a three-pointer from the corner, and TJ Ming then made three straight shots, including an and-one. Malik Hall capped off the 12-3 scoring run with a basket to bring the score to 42-37 in favor of the Hornets. Cook finished the quarter on a 10-0 scoring run to take a 52-37 lead into the fourth quarter.

Cook County finished the game off by outscoring the Cougars in the fourth quarter 28-15 to win by the final score of 80-52.

TJ Ming led the Cougars in scoring in the game with 14 points. KJ Williams also finished the game in double-figures with 11.

The Cougars will now play in Adel at 5:30 today against Dougherty County in the consolation game for third place in the region. 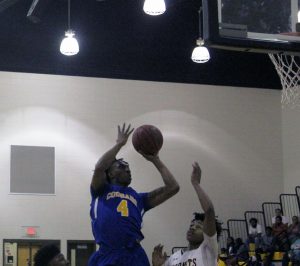