MONTEZUMA- The region tournament runs of both Dooly County basketball teams came to an end on Friday night at Macon County High School. The Lady Bobcats made a solid run up to the semifinals with tournament wins over Hawkinsville, Schley County and Central before falling to the host team and eventual region runner-up, Macon County. The Bobcats entered the tournament in the quarterfinal round where they defeated Brookstone before falling to eventual region champs Central.

The Dooly boys trailed Central 14-9 at the end of the first quarter. Jarquavius Brown and Zeff Felton kept the Bobcats in the game in the second quarter. Reggie Smith got out on the fast break late in the second quarter and lobbed a pass to Brown for an alley-oop dunk to cut Central’s lead to three going into halftime.

Central took control of the game in the third quarter by outscoring Dooly 14-7 during the period. The Bobcats trailed by as many as 16 in the fourth quarter, but they were able to get the score down to as close as eight late in the quarter. Central ultimately advanced to the region championship by a final score of 56-46.

The Lady Bobcats fought all the way back to tie the score at the end of regulation by outscoring the Lady Bulldogs 40-26 in the second half. Macon County outscored Dooly 13-4 in overtime to hang on for a 75-66 win to advance to the region championship.

The Lady Bobcats season came to an end with the loss to Macon County, as they finished a few positions outside of the 24-playoff spots in the GHSA A rankings. The Dooly County boys finished the season ranked at number 15 in the rankings, so they will host a first round playoff game this weekend in Vienna. 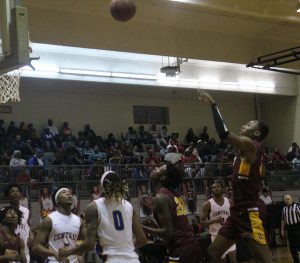 Rashad Lucas floats a shot over the Central defense.