MCRAE- The Wilcox County basketball teams played in the region 2-A region championships in McRae on Saturday. The Lady Patriots finished the regular season as the two seed and entered the tournament in the semifinal rounds, where they defeated Clinch County 57-46 on Friday night to reach the championship game against hosts Telfair County. The Patriots ended the regular season as the three seed, and entered the tournament bracket in the quarterfinal round. After defeating Turner last Wednesday night, the Patriots knocked off Clinch County 76-70 in the semifinals to reach the championship game where they faced Lanier County.

The Lady Patriots put the first points on the board in their game on a shot by Asia Montgomery. Trajata Colbert and Jamerical Marshall also scored for Wilcox in the first quarter, but the Lady Trojans knocked down a couple of big three-pointers in the period to take an 11-10 lead into the second.

Montgomery gave the Lady Patriots the lead early in the second period after knocking down a jump shot off of an assist from Marshall. Jamerical Marshall then scored and got fouled on the fast break shortly after. The subsequent free throw put Wilcox in front by four, and they extended their lead by outscoring the Lady Trojans 8-4 for the remainder of the quarter. Colbert, Marquetta Griffin and Marteisha Griffin also scored in the quarter for Wilcox County. The Lady Patriots led 23-15 at halftime.

LeAunna Mahogney knocked down two free throws at the start of the second half to put Wilcox ahead by 10. The Lady Trojans then went on a 9-0 scoring run to cut the Wilcox lead to one. Marshall then made a couple of shots in a row to pull the Lady Patriots back ahead 29-24. Telfair finished the quarter with a 6-2 run to make the score 31-30 in favor of Wilcox entering the fourth period.

After a short delay due to some lighting issues in the gym, the Lady Trojans started the fourth quarter with a 14-4 scoring run to take a 44-35 lead with just over three minutes to play in the game. The Lady Patriots fought back with scores from Montgomery, Mahogney, Marquetta Griffin, and Alayshia Dixon. They were able to pull the score back as close as three points with less than 20 seconds to go, but Telfair County made their free throws late to hold on for the win by a final score of 52-46.

Lanier went up by six with the first basket of the second quarter, but Tisdol added a couple of scores, including an and-one, to cut the the Bulldog lead back to one-point. The teams traded scores over the next couple of minutes as Keyshawn Howard and Cameron Patterson got on the score sheet for the Patriots. Landon Ledford hit a three-pointer with less than a minute to go to put the Patriots ahead 25-24 before Lanier County came back with a score to take the lead with just a few seconds remaining. Tisdol then made a floater at the buzzer to send Wilcox County into halftime with a one-point lead at 27-26.

Wilcox cut the Bulldog lead down as close as four points with 3:34 remaining in the game, but Lanier County was able to win the championship by a final score of 69-59. 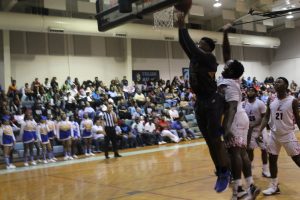 Desmond Tisdol scores for the Patriots.