CORDELE- The Crisp Academy basketball teams hosted the GISA region 3-AA tournament semifinal games last night. The Lady Wildcats had their comeback attempt fall just short in their semifinal against the Terrell Academy Lady Eagles, while the Wildcats knocked off the Southwest Georgia Academy Warriors in an entertaining contest.

The Lady Wildcats fell behind 12-0 at the start of the first quarter of their game. Crisp Academy finished the quarter with a 6-2 scoring run to cut into the Terrell lead slightly. Maddie Milani scored four of the points, and Jarrett Floyd scored the other two points in the period. Terrell Academy led 14-6 at the end of the first quarter.

The Lady Eagles added to their lead in the second period by outscoring the Lady Wildcats 10-7 in the quarter. Milani scored all seven of the Crisp Academy points in the quarter, including a three-pointer. Terrell had a 24-13 lead at halftime.

Kaylee Moore opened the third quarter with a three-pointer to help the Lady Wildcats cut the Terrell lead down to eight points. The Lady Eagles scored the next four points in the game to increase their lead back out to 12. Crisp Academy answered with a 9-4 scoring run to close out the quarter. Claire McGarr scored six points during the run and Moore tacked on the other three points with her second three-pointer of the quarter. The Lady Wildcats trailed 32-25 going into the final period.

The Lady Eagles missed a few free throws during the final minute of the game to leave the door open for a Crisp Academy comeback, but Terrell ultimately won by a final score of 39-35 to clinch a spot in Friday’s region title game.

The boys’ game started with a back and forth first quarter that saw the teams trade small scoring runs and the lead. Landon Jacobs got the Wildcats on the board with a score to start the game. Trey Williams, Griffin Gravitt, and Ravi Patel also scored in the first quarter for Crisp Academy. The teams entered the second period tied at 12.

SGA used a 14-6 second quarter scoring run to take a 26-18 lead late in the quarter. Jacobs and Gravitt each scored shortly before halftime while Patel and Bobby Ray Mitchell also scored during the second period, but SGA led 26-22 at halftime.

Gravitt started the second half with a bucket and a free throw to cut the Warrior lead to one-point. The score started a 12-3 scoring run that put the Wildcats in front 35-31 late in the period. SGA subsequently scored to cut the Wildcat lead back to two, but a three from Ravi Patel and bucket from Bobby Ray Mitchell helped the Wildcats take a 39-33 lead into the final quarter.

Mitchell and Patel opened the fourth period with scores to extend the Crisp Academy lead out to nine points. A 12-3 scoring run by SGA tied the score at 45-45 about halfway through the fourth period. Griffin Gravitt scored a layup and got fouled to put Crisp back up by three.

The Warriors followed up with a score to cut the Crisp Academy lead back to one-point, but the Wildcats finished the game on a 12-2 scoring run to advance to the region title game. Crisp won by a final score of 60-49. 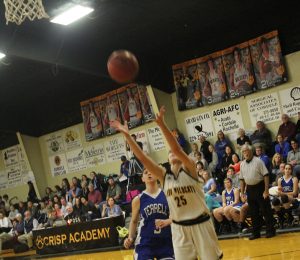 Kaylee Moore reaches for a rebound after a missed shot. 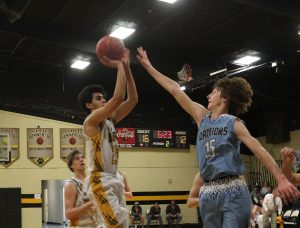