Dooly County moves on in playoffs with win over Hancock Central

VIENNA- The Dooly County boys basketball team advanced to the second round of the GHSA A state playoffs after defeating the Hancock Central Bulldogs on Friday night in an exciting contest.

The Bulldogs got on the scoreboard first with a basket to take a 2-0 lead. Bobcat leading scorer, Jarquavius Brown then got Dooly on the board with a three-pointer and then another basket to give them a 5-2 lead. Hancock answered with a three of their own to tie the score at five, but the Bobcats used three-pointers from Brown and Shamon Zanders, along with baskets from Jeff Felton and Desi Lester to go on a 13-7 run to close out the first quarter. Dooly County led 18-12 at the end of the first quarter.

The Bulldogs took the lead back by using a 7-0 scoring run at the beginning of the second quarter. Dooly quickly answered with an 8-0 run highlighted by a fast break dunk from Brown. The run also featured scores by Lester, Zeff Felton and Reggie Smith. The Bobcats led 26-19 at the 4:40 mark of the second quarter.

The back and forth action continued shortly after, as Hancock tied the score back up using a 7-0 run featuring their third made three-pointer of the night. The teams traded scores over the final few minutes of the quarter, and the Bulldogs took a 37-35 lead with them into halftime after scoring on a put back layup just before the second quarter ended.

Hancock Central got the first score of the second half with an and-one layup to go up 40-35. Brown and Zeff Felton then combined for the next four points for Dooly to get the Bobcats back to within one point of the lead. The Bulldogs subsequently increased their lead back out to three points after a layup, but Zanders connected on another three-pointer to tie the score. The teams swapped the lead over the remainder of the quarter until a late three-pointer put Hancock back in front 55-53 at the end of the third period.

Desi Lester tied the score at the start of the fourth quarter with a steal that led to a fast break layup. Hancock scored about a minute later to take a 57-55 lead, but the Bobcats took control of the game with a 10-0 scoring run over the next few minutes. Brown had five points during the run, while Lester scored three of the points, and Zeff Felton had the other two points in that stretch.

The Bulldogs knocked down another three to cut the Dooly lead back to 65-60 with just less than four minutes to go in the game, but Reggie Smith and Zeff Felton tacked on scores over the final couple of minutes to put the game away and send Dooly County to the second round of the playoffs. The Bobcats won by a final score of 68-62.

The Bobcats will play Central High School of Talbotton for the third time this season in the second round of the playoffs Thursday night at six in Talbotton. 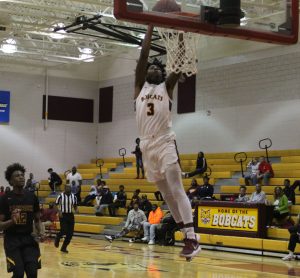 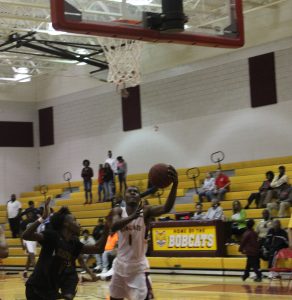 Desi Lester goes in for a layup.