CORDELE- The Crisp Academy basketball teams finished up the region tournament on Friday night. The host Wildcats knocked off Terrell Academy to win the region championship, while the Lady Wildcats defeated the SGA Lady Warriors earlier in the day in the consolation game to finish up in third place in the region.

Terrell Academy got the game started with a 7-0 scoring run to put Crisp Academy behind about halfway through the first quarter. The Wildcats finally got the offense rolling shortly after with a 6-0 run with scores from Bobby Ray Mitchell and Trey Williams. Terrell Academy scored the next four points in the quarter to go up 11-6 with about a minute to play in the period. Ravi Patel scored the final points of the first half to pull the Wildcats within three points of the lead going into the second quarter, as they trailed the Eagles 11-8.

Mitchell opened the scoring in the second quarter, but Terrell scored the next five points to extend their lead to 16-10. Those five points would prove to be the only ones the Eagles would score in the quarter, however, as the Wildcats finished the quarter on a 12-0 run. Mitchell, Patel, Landon Jacobs and Baylor Pless all scored in the quarter for the Wildcats, as they took a 22-16 lead into halftime.

Crisp Academy pulled away at the start of the third period with a 15-0 scoring run. Griffin Gravitt had six points during the run, while Patel, Mitchell and Nathan Willis all tacked on points in that stretch as well.

The Wildcats stretched the lead out to as much as 21 points in the third quarter, but Terrell was finally about to put a run together to get the lead back down to 13 points. Mitchell and Willis both added scores just before the end of the period to give CA a 46-29 lead going into the fourth quarter.

The Wildcats finished the game off by outscoring Terrell 18-17 in the final quarter. Crisp Academy won by a final score of 64-46 to win the region title and clinch a home game for the first round of the playoffs.

SGA started the game with a quick 4-0 scoring run to put the Lady Wildcats behind in the first quarter. Claire McGarr and Maddie Milani combined for the first five Crisp Academy points over the next couple of minutes, but the Lady Wildcats were behind 6-5 about halfway through the period.

Ainslee Forsythe made a big hustle play shortly after, when she fought for an offensive rebound that set up a score by Milani, which gave the Lady Wildcats their first lead of the game. Maggie Bullington scored the final points of the first quarter for Crisp Academy as they took a 9-8 lead into the second quarter.

McGarr started the second quarter by splitting a pair of free throws and then assisting Milani for her third basket of the game. Crisp Academy also picked up scores from Forsythe, Bullington, and Kaylee Moore in the second period to extend their lead out to 22-18 at halftime.

The Lady Wildcats outscored SGA 9-3 in the third quarter using some solid defense. McGarr added seven points to her total in the third, and Bullington provided the other bucket. Crisp Academy led 31-21 entering the fourth quarter.

The Lady Warriors scored the first four points of the final period to cut the Crisp lead down to six points with about five minutes to play in the game, but Maddie Milani scored six points in the final few minutes to finish the game off from there. The Lady Wildcats won by a final score of 37-28.

McGarr finished as the leading scorer for Crisp Academy with 17 points, and Milani contributed with12 points in the game for the Lady Wildcats. Other CA scorers: Maggie Bullington- five points, Kaylee Moore- two, and Ainslee Forsythe- one. 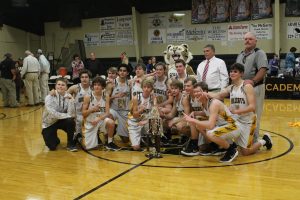 Claire McGarr creates space in an attempt to score vs SGA.