ROCHELLE- The Wilcox County Patriots basketball team was eliminated from the GHSA A playoffs in heartbreaking fashion against the Randolph-Clay Red Devils on Saturday night. The Red Devils came up with the upset victory by just one point after making a couple of free throws with less than seven seconds remaining in the game.

The Red Devils got out to an early lead in a low scoring first quarter. They led 9-5 late in the period before Jordan Brown connected on a three-pointer that just beat the buzzer, pulling the Patriots within one point of the lead. Desmond Tisdol and Keyshawn Howard also scored for Wilcox in the quarter, but Randolph-Clay had the lead 9-8 going into the second quarter.

Two free throws by Willie Moore gave the Patriots the lead 10-9 at the beginning of the second period. The teams swapped small scoring runs for the remainder of the first quarter until Howard hit a three just before the buzzer to send Wilcox into the halftime break with a 29-28 lead. Tisdol scored seven points in the quarter for the Patriots, while Landon Ledford, Demetric Young, and Jordan Brown all pitched in with scores in the period.

The Patriots outscored Randolph-Clay 19-17 in the third quarter with eight points from Brown, five from Howard, four from Tisdol and two from Azavion Deans. The Red Devils knocked down a big three just before the quarter to cut the Wilcox lead to 48-45 going into the final quarter.

The Red Devils tied the score early in the fourth quarter with a bucket and a free throw. Brown hit another three for the Patriots shortly after, but Randolph-Clay subsequently tied the score back up with a three of their own with less than six minutes to play.

A Red Devil score at the 4:50 mark gave them a brief lead at 53-51. Brown got fouled shooting a three-pointer and hit all three of the free throws to put Wilcox County back in front by one with 4:30 left in the game.

The Patriots got up by four over the next couple of minutes after scores by Moore, Brown and Howard, but the Red Devils quickly tied things back up with a basket and a couple of free throws. The teams were tied at 58 with just 1:26 to play.

A Randolph player was then fouled on a shot attempt with less than seven seconds to play in the game, and after he made both free throws the Patriots were unable to find a score to win the game. The Red Devils came away with the win 64-63 to advance to the second round.

Desmond Tisdol led the Patriots in scoring with 20 total points. Jordan Brown finished with 19 points and Keyshawn Howard was also in double figures with 12.

The Patriots finished the season with an overall record of 21-8. The Lady Patriots will be in action in the second round of the playoffs tonight when they host Macon County at 6. 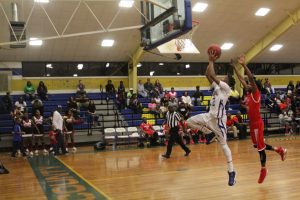 Demetric Young gets to the basket for a Wilcox score. 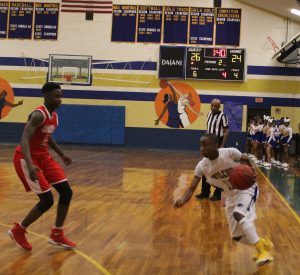 Jordan Brown prepares to drive against his defender.

Dooly County moves on in playoffs with win over…