The Crisp Academy Wildcats joined the Lady Wildcats in the second round of the state playoffs with their win over First Presbyterian Christian Academy on Wednesday night.

The Wildcats started the game with a 12-2 scoring run with scores from Nathan Willis, Bobby Ray Mitchell, Griffin Gravitt, Landon Jacobs and Spencer Stubbs. FPCA used some three-pointers to pull the score back to 15-12 in favor of Crisp Academy, but Nathan Willis hit a close range shot at the buzzer to put the Wildcats up 17-12 at the end of the first quarter.

Willis, Mitchell and Ravi Patel led the Wildcats on a 7-0 run to start the second quarter, but the Highlanders subsequently responded with a 7-0 scoring run of their own. FPCA used several more threes over the next couple of minutes to keep the score fairly close, but Crisp scored the final nine points of the quarter to take a 41-27 lead into halftime.

FPCA used a big third quarter to cut into the Crisp Academy lead. The Highlanders outscored CA 17-11 in the third period. Patel, Mitchell, Willis, Gravitt and Stubbs all scored during the period for the Wildcats.

FPCA started the final period with a 10-2 scoring run to tie the score at 54 with about five minutes to play. Landon Jacobs hit two free throws shortly after to put the Wildcats back in front, but a score by the Highlanders quickly canceled that out and the score was tied about halfway through the fourth quarter. Mitchell and Gravitt hit some crucial free throws over the next couple of minutes to help Crisp to a 64-58 lead with about two and half minutes remaining.

FPCA made one final push to get the Wildcat lead down to three points, but late scores by Mitchell, Patel and Stubbs helped seal the win for CA. The Wildcats won by a final score of 73-61. 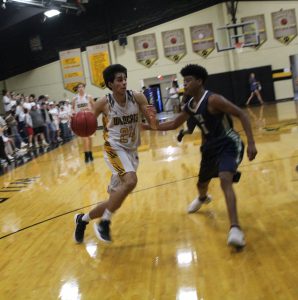 Ravi Patel drives to the basket in an attempt to score in Wednesday’s nights playoff game. 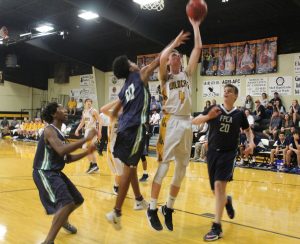 Nathan Willis attempts a layup in CA’s win over FPCA.