Fullington senior, Lauren McIntyre opened up the scoring in the game with a quick three-pointer. The Lady Trojans built up a solid early lead from there with jump shots by Grace Musselwhite and Carlee Roberts. Fullington extended the lead over the last couple of minutes in the first quarter with a corner three by Skylar Bailey and a few free throws from McIntyre. Some pressure defense helped the Lady Trojans force several Georgia Christian turnovers throughout the period, and the Lady Generals were only able to score one point in the quarter. Fullington led 13-1 at the end of the first quarter.

The Lady Generals were finally able to get some offense going at the start of the second quarter with a couple of free throws and a three pointer, which netted a 5-1 scoring run to make the score 14-6 in favor of Fullington.

Musselwhite and Sarah Kate Wall combined for three free throws over the next couple of minutes, and Skylar Bailey subsequently hit her second three of the game to put the Lady Trojans ahead by a score of 20-6. Georgia Christian was able to get a layup to go just before the buzzer to make the score 20-8 in favor of the Lady Trojans going into the halftime break.

The Lady Trojans took control of the game at the start of the third period with eight straight points. Chantell Coley assisted McIntyre on a three-point shot for the first three points of the run, and then McIntyre knocked down her third three-pointer of the night. She hit a couple of free throws shortly after to complete the 8-0 run and give Fullington a 28-8 lead about halfway through the third quarter. Georgia Christian subsequently put together a 6-2 scoring run over the next few minutes to cut the Fullington lead down to 16 points, but Grace Musselwhite scored the final points of the quarter to extend the lead back out to 18 points for the Lady Trojans. Fullington was ahead 32-14 at the end of the third period.

The teams traded scores for the early part of the fourth quarter as Fullington got scores from Musselwhite and Wall early on in the quarter. The Lady Generals were able to put together a 9-2 scoring run about halfway through the period to cut the lead down to 13-points, but they could not manage to get the score any closer than that.

McIntyre and Bailey hit several free throws over the final couple of minutes to ensure that there was no threat of a comeback attempt from Georgia Christian. The Lady Trojans ended up winning the contest by a final score of 50-31.

The state title is the second GICAA girls’ basketball title for the Lady Trojans over the last three years. They finished the season with an overall record of 25-5 and a long winning streak that has been intact since the end of December. 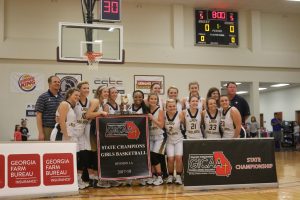 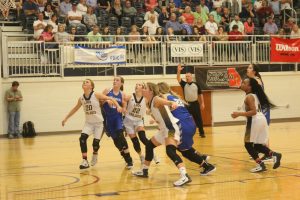 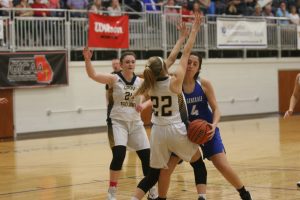 Skylar Bailey (22) and Sarah Kate Wall (24) on defense for the Lady Trojans. 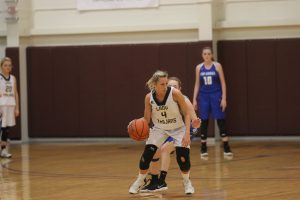 Lauren McIntyre in possession of the ball.