Bobby Ray Mitchell got the scoring started for the Wildcats shortly after opening tip when he knocked down a pull-up jump shot to give Crisp an early 2-0 lead. The Patriots knocked down a three right after to briefly take the lead, but Ravi Patel answered with a three of his own to put the Wildcats back in front.

Patel and Griffin Gravitt would tack on a layup each over the next couple of minutes, but CCA used a couple more three-pointers to open up an 11-9 lead about halfway through the first quarter. The Wildcats finished the quarter on a 6-0 scoring run, with a baseline jumper from Trey Williams, a fast break layup by Ravi Patel and a mid-range jumper from Spencer Stubbs. Crisp Academy led 15-11 at the end of the first quarter.

The Wildcats kept the momentum going at the start of the second quarter with layups by Mitchell and Patel. The teams swapped scores for the next few minutes and the Patriots were able to pull the Crisp lead down to 23-20 with about two minutes left in the first half. Mitchell and Nathan Willis knocked down a few free throws over the next minute to extend the lead, and Mitchell subsequently made a driving layup for the final score of the period to send the Wildcats into the break with a 28-20 lead.

Crisp Academy then came out on fire in the third quarter to take complete control of the game. Patel and Mitchell led the Wildcats on a 14-2 run at the start of the second half using the three point shot. Patel hit three shots from distance during the third quarter and also tacked on three free throws, while Mitchell scored five points with one shot from distance and two free throws. Willis and Stubbs also added a basket each in the quarter, and the Wildcats led 49-27 entering the fourth quarter.

Crisp Academy stretched the lead out to as high as 26 points in the fourth period, but the Patriots fought hard to get the score back as close as 59-50 late in the game. The Wildcats ultimately made their free throws late in the game to put CCA away. Griffin Gravitt scored nine points in the fourth quarter to help finish the game off for a Crisp Academy win. The Wildcats won by a final score of 62-50 to clinch their spot in the state championship game.

Ravi Patel led the Wildcats in scoring with 21 points and four three-pointers on the night. Bobby Ray Mitchell and Griffin Gravitt also put up double digits with 18 and 11 points respectively. Nathan Willis, Trey Williams and Spencer Stubbs all finished with four points apiece.

The Wildcats will now play Furtah Prep for the GISA AA state title at Mercer at 3:40 on Saturday afternoon. Furtah is the champion of region 1-AA and defeated Thomas Jefferson, SGA and then Robert Toombs to reach the state championship. 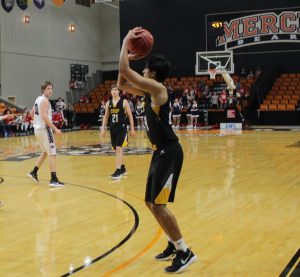 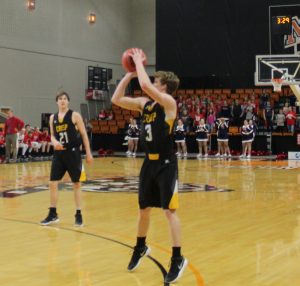 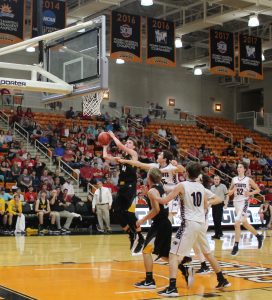 Nathan Willis drives to the basket for a score. 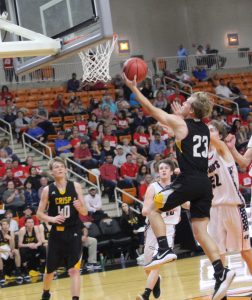 Griffin Gravitt gets past the CCA defense for a layup.