MACON- The Crisp Academy Lady Wildcats basketball team ended up coming up just short in the GISA final four on Friday afternoon at Mercer. They were defeated in overtime by the defending AA state champions, Brentwood Lady Eagles, but the Lady Wildcats put in a phenomenal effort from the opening tip to the buzzer.

Kaylee Moore hit a long two-point shot early on in the first quarter to give Crisp Academy the first points of the game. Brentwood scored the next seven points with a three-pointer and a couple of mid-range jump shots that helped them take a 7-2 lead about halfway through the first quarter.

The Lady Wildcats answered with a 10-0 scoring run to end the first quarter. Moore scored four of the points during the run with two free throws and another long jumper, while Claire McGarr scored the other six points in that stretch with a couple of layups and a mid-range shot. Crisp led 12-7 at the end of the first quarter.

The Lady Eagles used a big second quarter to take control of the game as they outscored Crisp 15-6 in the period. McGarr kept the Lady Wildcats afloat during the quarter, scoring all six of the CA points off of assists from Ainslee Forsythe and Maddie Milani. Brentwood took a 22-18 lead into halftime.

The third quarter belonged to the Lady Wildcats, as they were able to convert on several big scoring opportunities. McGarr got the first bucket of the second half off of an assist from Moore, but Brentwood subsequently got a layup and a free throw to go, which allowed them to take a 25-20 lead about halfway through the third period.

Claire McGarr was fouled shortly after, and converted on both free throws, but the Lady Eagles subsequently scored to keep their lead at five points. Kaylee Moore began to heat up with two straight three-pointers that put the Lady Cats back in front 28-27 at the two-minute mark of the third quarter. Brentwood then got a layup to fall to get back ahead by one-point late in the quarter, but Moore hit a pull-up jump shot next to give Crisp a 30-29 lead going into the final period.

Moore kept her hot streak going with another three-pointer to open up the fourth quarter, and McGarr hit a couple of free throws shortly after to put CA ahead 35-29 about a minute into the fourth quarter. The Lady Eagles were then able to put together an 11-4 scoring run to retake the lead about halfway through the period. Milani scored the four points for the Lady Wildcats during that stretch. Brentwood led 40-39 with 3:51 to play in the game.

Milani tied the score at 40 with a free throw just a few seconds after, and McGarr then made a layup to put the Lady Cats back in front with less than three minutes to go in the game. The score stood at 44-44 with 1:10 to play in the game after a couple of scores by Brentwood that were answered by another score from McGarr.

After Brentwood missed a shot that would have given them a late lead, Maddie Milani grabbed the rebound and dribbled the entire length of the floor for a tough layup that put Crisp in front 46-44 with just 25 seconds left in the game.

Brentwood made two big free throws with less than nine seconds to play to tie the score at 46. The Lady Wildcats had one chance to win it at the buzzer, but the Lady Eagles did just enough on defense to force overtime, as Crisp could not get a game-winning shot attempt off in time. The score was tied at 46 at the buzzer so the teams were forced to decide the winner in an overtime period.

Brentwood ran off a good portion of the clock and they were able to take the lead in overtime with a couple of free throws, and a layup shortly after put them in front 50-46.

Things were looking bleak for the Lady Cats at that point but eighth grader, Maggie Bullington, got open under the basket and was able to give CA some life with a layup off of an assist from McGarr. The layup made the score 50-48 in favor of Brentwood with just over a minute to play in the game.

The Lady Eagles chewed up a large portion of the remaining time before making a free throw to get in front by three points. The Lady Wildcats found themselves with one final chance to tie the score but they could not find a score to extend the game. Brentwood was able to hang on to win by a final score of 51-48 to advance to the state championship game.

Seniors, Claire McGarr and Kaylee Moore put in great performances in their final high school basketball game as Lady Wildcats. McGarr led Crisp in scoring with 22 points, and Moore finished the game with 17. Maddie Milani ended up with seven points, while Maggie Bullington scored the other two points for the Lady Wildcats.

The heartbreaking overtime loss ends the season for the Lady Wildcats. They finished with a final record of 13-19 on the season, but proved that they were still a legitimate contender for state despite their record. 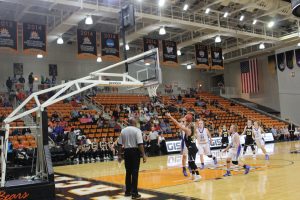 Senior Jarrett Floyd attempts a shot during the third quarter. 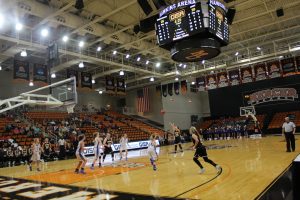 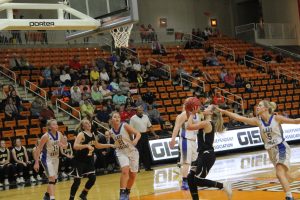 Maddie Milani drives to the basket for a score.