MACON- The Crisp Academy basketball season came to a heartbreaking end on Saturday afternoon after the Wildcats were defeated in the state championship by the Furtah Preparatory School Falcons.

Neither team was able to score in the first couple of minutes of the game, but Furtah finally got the scoring started with a basket and a free throw. Landon Jacobs got the Wildcats on the board with a corner three-pointer shortly after to even the score. A Falcon turnover then led to a Crisp Academy fast break layup that was scored by Jacobs.

Bobby Ray Mitchell hit a couple of free throws with about 50 seconds left in the first quarter, and Nathan Willis then scored a layup off an assist from Jacobs. Furtah scored at the buzzer, but the Wildcats led 9-6 going into the second period.

Willis started the second quarter with a mid-range jump shot to extend the Crisp lead out to five points, but the Falcons outscored CA 16-6 for the remainder of the quarter. Spencer Stubbs scored all six of the Wildcat points during the Furtah scoring run, off of assists from Jacobs and Trey Williams. Furtah had a 22-17 lead at halftime.

The Falcons started the second half with a couple of layups to extend their lead out to nine points. Griffin Gravitt made a layup to cut the Falcon lead back to seven points, but Furtah brought the lead back out to nine with a score at around the six minute mark of the quarter.

Bobby Ray Mitchell kept Crisp in the game, scoring 13 points over the remainder of the third quarter. He hit a couple of mid-range jump shots about halfway through the quarter that were quickly equaled by Furtah. He was able to get a tough layup to go despite a Furtah foul and knocked down the free throw to make the score 32-26 in favor of the Falcons with 2:54 to play in the period.

After Mitchell split a pair of free throws, Furtah hit a three-pointer to pull the lead back out to eight points. Jacobs assisted Mitchell on a layup with 1:30 to go in the quarter, but the Falcons answered right back with a long jump shot. Mitchell was then able to find some space and hit a three-pointer at the buzzer to get the Wildcat fans on their feet. Crisp trailed 37-32 going into the fourth period.

Furtah extended the lead back out to nine at the start of the fourth with a couple of scores after running some time off the clock. Willis hit a pull-up jump shot shortly after to cut the Falcon lead back down to seven, but Furtah got a layup to cancel out the score from Willis. The Falcons led 43-34 with about four and a half minutes to play.

Jacobs hit his second three-pointer of the night shortly after to get CA back within six points, but the Falcons continued to chew up the clock and they made some shots to put the pressure on the Wildcats.

Gravitt and Mitchell made a few free throws over the next couple of minutes to get the Furtah lead back down to 47-41 with 1:43 to play, but the Falcons extended the lead out to 10 points with several free throws shortly after. Stubbs scored five points in the last minute of the game to give the Wildcats a little hope, but Furtah was able to make some free throws late to win the championship. The Falcons won by a final score of 54-46.

The loss was a heartbreaking end to a great basketball season for Crisp Academy, in which the Wildcats finished as the GISA AA state runners-up, as well as region 3-AA champions and they ended the season with an overall record of 23-8. 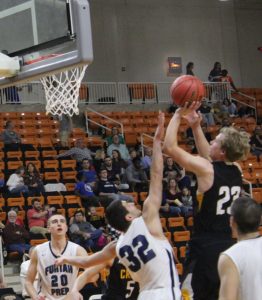 Griffin Gravitt drives to the basket for a score.

Bobby Ray Mitchell scores a layup during the fourth quarter.