ROCHELLE- The Crisp Academy baseball team made the short trip over to Rochelle on Monday afternoon to take on the Wilcox County Patriots. The Wildcats led for the entire game up until the bottom of the seventh inning when the Patriots escaped with a walk-off win.

Crisp Academy picked up two runs in the top of the first inning using three hits and two walks off of Wilcox County’s pitcher, Trey Bishop. Aaron Titshaw and Baylor Pless each recorded a hit and a run in the first inning for the Wildcats, while Zach Pate added a base hit and an RBI.

Crisp Academy kept the 2-0 lead over the next couple of innings as the pitching for both teams proved to be tough. Bishop was able to turn his outing around after the first inning, as he held the Wildcats scoreless in his final two innings of work. Baylor Pless came in to pitch for the Wildcats in the bottom of the third and struck out three Patriots to send the game to the fourth inning.

Clark Gaines came in to pitch for Wilcox in relief of Bishop at the start of the fourth frame and the Wildcats were able to tack on a couple of runs shortly after. Julian Floyd led the inning off with a base hit to right and Titshaw followed up with a walk. A sacrifice bunt from Dylan Farmer moved both runners into scoring position, and Baylor Pless then reached base on an infield hit to load the bases. Blake Odom knocked in the third Crisp run of the game with an RBI single, and Griffin Gravitt put CA ahead 4-0 with an RBI groundout.

Wilcox scored their first two runs of the game in the bottom of the fourth inning. Rhett Davis got a one-out base hit, and Phillip Fisher chased him home with an RBI double. Landon Ledford subsequently sent Fisher home with an RBI single to help the Patriots cut the Wildcat lead in half. The Wildcats led 4-2 going into the fifth inning.

Wilcox pitcher, Clark Gaines, and CA pitcher, Spencer Stubbs, traded scoreless frames until the Patriots were able to tack on another run in the bottom of the sixth inning. Kam Bruce reached base with a one-out walk, and another hit by Rhett Davis gave Wilcox runners at first and third base. Bruce was able to score on an error shortly after. The Patriots were then nearly able to tie the score on a wild pitch from Stubbs, but the Wilcox base runner ended up being tagged out at the plate. The Wildcats were able to tack on a run in the top of the seventh, scored by Garrett Gravitt, to take a 5-3 lead into the bottom half of the seventh.

Brock White led off the bottom of the seventh with a base hit to center to give the Patriots some life. Cameron Coleman followed up with a hit to left center that ended up rolling all the way to the fence, allowing White to score all the way from first base. The run made the score 5-4 in favor of the Wildcats, and the Patriots still had no outs in the inning.

Kam Bruce put down a bunt single next to put runners at first and third for Wilcox. Jaydon Coleman subsequently came up to bat and sent a sacrifice fly into the outfield that sent a run home to tie the score at five aside. Seth Satterfield followed up with a fielder’s choice groundout for the second out of the inning. The Patriots were then able to win the game with a walk-off on a two-out base hit that rolled all the way to the fence allowing Satterfield to score the game-winning run from first base. Wilcox won the game by the final score of 6-5.

Clark Gaines ended up picking up the win in the game for Wilcox County after going four innings in relief of Trey Bishop and giving up three runs on five hits and four walks, while striking out two Wildcats. Rhett Davis led the Patriots on offense with three hits, a stolen base and one run scored.

The win brought Wilcox County’s record to 4-3 on the season with a 2-2 record in region play so far. Their next game will be in Rochelle against Turner County Friday at 5:30. 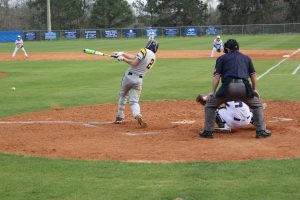 CA’s Baylor Pless knocks a base hit to left field. 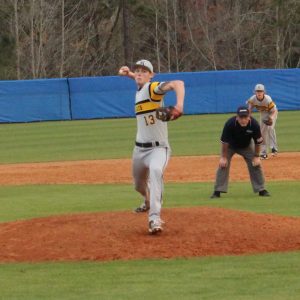 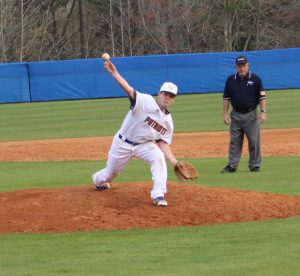