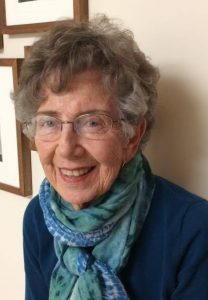 Mary Louise Shell died peacefully in her sleep in the early morning hours of March 16, 2018.

Born November 26, 1925, Mary Louise was the big sister of four younger brothers born to Vincent and Flavia Shurr of Austin, Texas.  She had a happy childhood, growing up in “The Hollow,” a lovely, rambling home in the Hemphill Park neighborhood of Austin, just a few blocks from downtown.   Young Mary Louise loved all kinds of dance, and she especially enjoyed visiting her many cousins in her sprawling extended families, the Shurrs throughout Texas, and the Prudhommes in Texarkana and Natchitoches.

As a University of Texas coed, she performed with a troupe of USO dancers that toured the military bases in the Austin area.  The USO girls were ferried to and from performances by military bus, one driven occasionally by a young airman from Georgia, Edwin Shell.  Edwin and Mary Louise became the love of each other’s life.  They married at the end of the war and packed up the little Ford Coupe for the trip to their new home in Pitts, Georgia.

Mary Louise adapted with remarkable ease to the move from great big Austin to tiny Pitts, where she and Edwin made a wonderful life together.   Besides being a busy mother to her growing family of four boys, Mary Louise taught tap and ballet to young girls and helped direct many school pageants.

After Edwin retired, he and Mary Louise moved to Cordele to begin maybe the happiest years of their lives.  They became ardent travelers throughout the U.S. and Europe, and they were active in almost every aspect of Cordele First United Methodist Church.  In Cordele, Mary Louise became known as a gifted Sunday School teacher, a legendary party hostess, and flower grower extraordinaire (especially her profusion of Annabelle hydrangeas).

After Edwin’s death, Mary Louise moved to Carlyle Place in Macon, where she made many new friends.  The family wants to express their thanks to the friends, staff and caregivers at Carlyle Place, as well as LaWanda Watkins and the daytime caregivers from Interim Healthcare, who helped make Mary Louise’s final days happy.

Mary Louise is survived by her brother, Michael Shurr, and her four sons and their families: Ed (Julene), David (Jane), Gary (Jenny), and Scott, along with nine grandchildren and nine great-grandchildren.

Arrangements are by Rainey Family Funeral Services. An online guest register is available at www.raineyfuneral.com