ROCHELLE- The Wilcox County Patriots picked up a win over the Marion County Eagles on Thursday afternoon. The game was a back-and-forth contest that saw the teams swap the lead a couple of times, before the Patriots were able to take a late-inning lead and hang on for the win.

Trey Bishop got the start on the mound for Wilcox and started the game off with a 1-2-3 frame with three strikeouts. The Patriots were unable to get much going in the top of the first other than a one-out base hit by Jaydon Coleman. Marion County got two runners on base with two outs in the top of the second inning, but the Patriots got out of danger with a pop to the catcher for the third out of the inning.

Wilcox County subsequently scored three runs in the bottom half of the second inning to take the lead. Cameron Patterson reached base to start the inning off, and Phillip Fisher came up with a single to right field. Bishop came up next and provided the RBIs with a two-run triple to right field. Seth Satterfield was brought in as a courtesy runner for the pitcher, and he was able to score the third Wilcox run of the inning on an RBI groundout by Brock White. The Patriots led 3-0 heading into the third.

Marion got on the board with a couple of runs in the top of the third. After consecutive hits, the Eagles got their first run of the game on a sacrifice fly by Harrison Humber, and the second run came on an RBI single from Austin Connor. Bishop was able to limit the damage from there, as he picked up his fourth strikeout of the game to end the inning. Wilcox led 3-2 going into the bottom half of the frame.

The teams traded a couple of scoreless half innings until the top of the fifth, when Marion County took the lead for the first time in the game. An error and a walk gave the Eagles two runners on to start the inning, and Humber tied the game at 3-3 with an RBI double shortly after. Marion then took a 4-3 lead on an RBI single to right field, and they added another run on a passed ball right after. The Eagles subsequently scored their sixth and final run of the game on an error. Lagan Luke was brought in to pitch in relief of Bishop and he was able to get the final two outs of the inning. Wilcox trailed 6-4 going into the bottom of the fifth.

Coleman got the Patriots off to a good start in their half of the inning with a leadoff double to right field, and Rhett Davis drove him in shortly after with a one-out RBI single that sent Coleman in to score. After Davis made it over to third base on an error, Landon Ledford was put in to run and he scored on an RBI single off the bat of Patterson. Bishop then sent Patterson home with a two-out RBI single. The three runs tied the score at 6-6 heading into the sixth inning.

Luke got three quick outs in the top of the sixth with two strikeouts and a popup to second. The Patriots then scored the go-ahead run in the bottom half to retake the lead.

White got a leadoff single and was moved up to second base on a sacrifice bunt from Kam Bruce. After a groundout moved the runner to third, the Marion pitcher walked Branson Owens. Davis came up next and drove in the eventual game-winning run on a single to right field.

Marion threatened to tie the score back up in the top of the seventh inning after the first two batters reached base with an error and a hit by pitch, but Luke finished the game off with a groundout and a couple of strikeouts. The Patriots won by a final score of 7-6.

The Patriots travel to play Atkinson County this afternoon and their next game will be at home on Tuesday afternoon versus Clinch County, with first pitch set for 5:30. 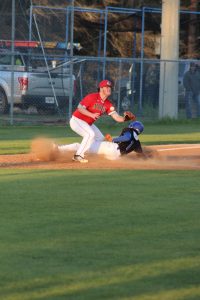 Wilcox County’s Cameron Patterson slides into third base ahead of the tag. 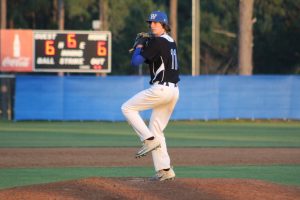 Wilcox pitcher, Lagan Luke, prepares to fire a pitch during the sixth inning. 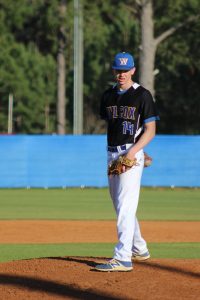 Trey Bishop getting ready to deliver a pitch.