CORDELE- The first ever Watermelon Capital Senior Olympic Games took place on Saturday, March 24, in Cordele. Nearly 30 competitors, including locals from the Cordele area and some from the surrounding counties, had a great time participating in various Olympic-style sporting events, as they showed off their abilities in front of family and friends. It was a great start to an annual event that many believe will continue to grow over the next few years. 11 of the originally scheduled events went on as scheduled, but some events out of the original list were called off because of a lack of competitors. Some of the participants managed to put up some decent times, distances and scores on their way to winning a first place medal. Results and winners from each of the events are listed below. A photo slideshow is posted below the results.

Sandra Musselwhite won a medal in the women’s event with a time of 10.88. Jimmy Culpepper picked up his first medal of the day in the men’s division.

Former Cordele Dispatch Sports Editor, Joe Joe Wright, won in the men’s 55-59 division, while Chip Culpepper picked up a medal in the 50-54 division.

Jean Bullington won a medal in the women’s competition while Paul Wenzel and Chip Culpepper took the medals in their classifications.

Alan Harris won the men’s 55-59 group with the longest throw of the day at 104’5”. George Scott and Jimmy Culpepper also medaled in the event in their age groups.

Kathy Odom took home a medal in the women’s event. Rick Lawson came up with a distance of 32’3” and edged out Alan Harris for a medal in the men’s 55-59 age group. Reverend Ulysses Morgan, George Scott and Jimmy Culpepper all won a medal in the event as well.

David Daniels posted an impressive unofficial time of 14.7 seconds to take first place in the men’s 55-59 division ahead of Rick Lawson. Reverend Morgan added another medal with a time of 18.59 seconds, and Jimmy Culpepper won a medal as well.

Culpepper was the only medalist in the event.

Rick Taylor was the only medalist in the event.

Leala Sheffield took first in the 80-84 age bracket with a time of 16:06.9, and Janet Devane was second. Patsy Johnson, Linda Mitchell, Carol Gamble and Cindy Floyd all won their age divisions. In the men’s race, Rick Lawson was the overall leader with a time of 15:43.7. Reverend Morgan, Dewey Mitchell, Jack Laster, and Richey Marbury all also picked up a medal.

Reverend Morgan was the leading scorer, going 18 for 25 on his attempts to pick up another medal. Rick Lawson shot 12 for 25 to edge out Joe Joe’s 11-25 mark in the 55-59 division. Chip Culpepper and Joel Wood won their divisions.

Linda Mitchell and Carol Gamble medaled in the event. 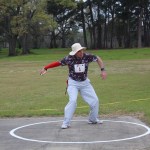 Jimmy Culpepper preparing to release one of his discus throw attempts. 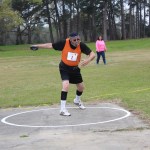 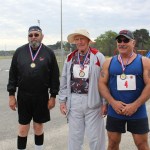 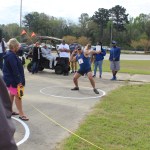 Alan Harris up for one of his shot put attempts. 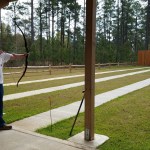 Rick Taylor takes aim at the target in the archery event. 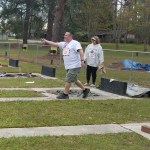 Chip Culpepper won a medal in the horseshoes event. 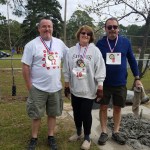 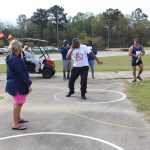 Reverend Morgan taking one of his shot put attempts. 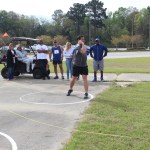 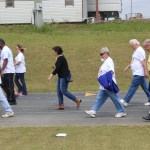 The 1500 meter walk was the biggest event of the day with 11 competitors. 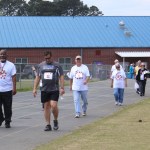 Reverend Morgan and Rick Lawson lead the way in the 1500 meter walk. 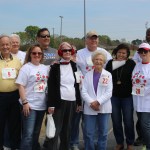 Participants of the 1500 meter walk after the conclusion of the race. 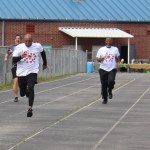 David Daniels won the 100 meter dash with an unofficial time of 14.7 seconds. 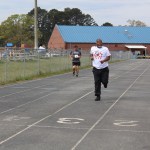 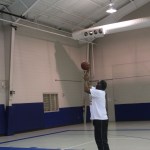 Reverend Ulysses Morgan shot 18 for 25 in the free throw event. 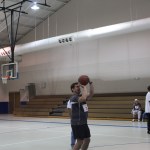 Rick Lawson shoots one of his 25 free throw attempts. 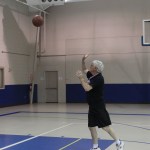 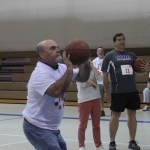 Joe Joe “Buckets” Wright lines up a shot during the free throw contest. 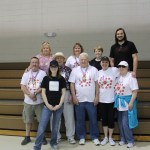 Jimmy Culpepper and his family, most of which either competed in the Cordele Games or helped as volunteers. 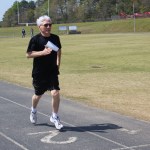 Joel Wood turns on the jets in the 200 meter dash.