Lady Cougars advance to second round of soccer playoffs

CORDELE- The Crisp County High School girls’ soccer team hosted Brantley County in the first round of the GHSA AAA state playoffs on Wednesday evening. The Lady Cougars came up with the victory led by a hat trick from Hunter Meadows and some stifling defense.

The Lady Cougars were able to create a few scoring chances early on in the first half with shots from Meadows and Greer Payne, but Brantley County did just enough to weather the storm for most of the first half. Crisp County got the scoring started when Meadows put her first goal of the game past the goalkeeper with just over seven minutes to play in the first half. The Lady Cougars added to their lead shortly after when Meadows scored a second goal right before the halftime break on a shot that the Brantley goalkeeper nearly saved, but the ball crept over the line to give Crisp a 2-0 halftime lead.

Crisp County continued to control the game for most of the second half by limiting the scoring opportunities for Brantley County. Meadows completed her hat trick about 15 minutes into the second half. The Lady Cougars won the match by a final score of 3-0.

Melissa Gonzalez got the shutout in goal behind a solid defense that got contributions from Nikki Stewart, Dariah Felton, L’Nydia Dunlap, and Megan Bloodworth, among others. The Crisp County defense has been solid all season, giving up less than a goal per game to their opponents on average.

The Lady Cougars will host in the second round of the playoffs on Tuesday night against the winner of the match between Savannah Arts Academy and Jackson High School. 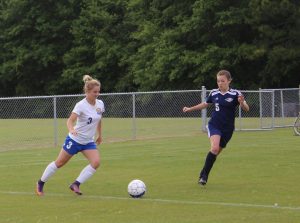 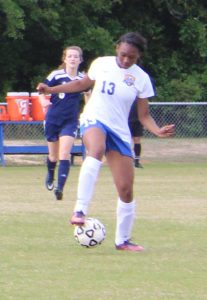 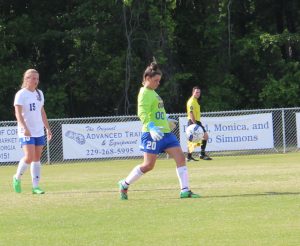 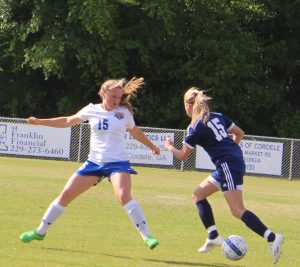 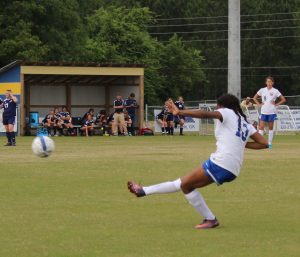 L’Nydia Dunlap sends a long pass ahead on a free kick. 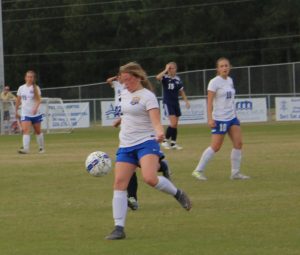 Kirin Webb (2) plays the ball up the field looking to create an attacking opportunity.