CORDELE- The Crisp County girls’ soccer team hosted Savannah Arts Academy in the second round of the state playoffs on Tuesday afternoon. In a very physical match that saw several hard fouls committed and some yellow cards issued, Savannah Arts came up with a 3-1 win over the Lady Cougars.

The SAA Lady Panthers put the pressure on Crisp from the opening kickoff, but the Lady Cougars did enough to keep the game tied at 0-0 for nearly the first 30 minutes of the game. The Lady Panthers finally broke through for the first goal of the game with just over 10 minutes left in the half.

Less than two minutes later, SAA took a 2-0 lead after a wild scramble inside the penalty area led to a deflected shot finding the back of the net.

The Lady Cougars trailed 2-0 but they quickly ignited a comeback attempt about a minute later. Hunter Meadows dribbled the ball up the wing past the Lady Panther defense and crossed the ball into the box toward teammate, Greer Payne, who was fouled inside the box for a penalty kick. Payne stepped up to take the penalty kick, but the goalkeeper for SAA made the save. The ball remained loose in the box after the save, and Payne was able to beat everyone else to it for the rebound goal to make the score 2-1 in favor of the Lady Panthers with about eight minutes to play in the first half.

SAA created one more big scoring opportunity with just over a minute to play in the half, but Crisp County goalkeeper, Melissa Gonzalez, came up with a big save to keep the score at 2-1 heading into the halftime break.

The Lady Panthers continued to control the game early in the second half with a big portion of the possession. An early second half shot from SAA hit the frame of the goal, and they kept piling on the pressure with several more shot opportunities. Gonzalez made several crucial saves in the second half to keep the Lady Cougars within striking distance of the lead.

The Lady Panthers tacked on their third goal of the game with about 25 minutes left in the second half to restore their two-goal lead at 3-1.

Crisp County created a few more opportunities over the remainder of the second half, but the Lady Panthers maintained their lead and won the match by the final score of 3-1.

The second round loss ends a great season for the Lady Cougars, in which they won the region 1-AAA championship and finished with a final record of 13 wins, four losses and one tie. The Crisp County boys’ team was defeated in the first round of state last Friday against one of the top teams in AAA, Tattnall County, by a final score of 6-1. 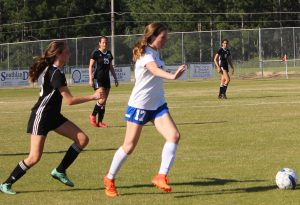 CCHS player, Maddi Hughes, (17) dribbles the ball as she holds off an SAA defender. 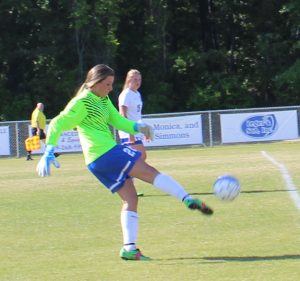 Crisp County goalkeeper, Melissa Gonzalez, sends the ball up the field after making a save.