VIENNA- The Dooly County High School football team hosted the Westover Patriots on Saturday afternoon for a spring scrimmage game. The Bobcats put up a great fight in the heat despite being greatly outnumbered by Westover’s large contingent of players.

The Bobcats had possession of the ball to start the scrimmage, and they put the game’s first points on the board early on in the contest. Just five plays into the game Bobcat quarterback Emaje Son found receiver Shamon Zanders on a deep pass up the sideline for a long touchdown pass. Son then found Reggie Smith on the two-point conversion play to put Dooly ahead 8-0 about three minutes into the game.

The teams swapped defensive stops over the next couple of possessions. Westover subsequently put their first points on the board with a short touchdown run by Dereion McCray after a five-play drive that started at around midfield. With the game being a scrimmage, special teams plays were not live so Westover had a free attempt at the extra point. The Bobcats led 8-7 with about two minutes to play in the first quarter.

On the very next play, Son found Smith for a quick touchdown from about 70-yards out. The point after attempt was unsuccessful this time, but the Bobcats led 14-7 with 1:46 to play in the first quarter.

After the teams traded another couple of defensive stops, Westover tied the score on another short touchdown run, this time by Keshawn Barbary. The extra point that followed tied the score at 14-14 with 8:56 to play in the second quarter.

The Bobcats then drove the ball down to about the Patriot 10-yardline with contributions from Son, Smith, Zanders, and Tremekis Miller but the drive stalled out and ended with an interception by Westover.

The Patriots drove the ball out past midfield but Dooly forced a turnover on downs after Bubba Almond stuffed the runner in the backfield on fourth down. The Bobcats then ran the clock out to send the game to a much needed halftime break.

Westover scored the first points of the second half on a long touchdown pass from Cameron Hopkins to Anthony Jackson. The extra point made the score 21-14 in favor of the Patriots just over two minutes into the second half.

The Bobcats fumbled possession of the ball away just two plays later and Westover tacked on a field goal with about five and a half minutes to play in the third quarter to take a 24-14 lead.

After another Dooly County turnover on downs, Westover began another long drive that saw them get to around the Bobcat 25-yard line, but Almond came up with a big interception on the last play of the third quarter to give Dooly possession of the ball.

The teams traded another couple of defensive stops for the remainder of the game, and Westover finished on top by the final score of 24-14.

Javon Dexter helped lead the Bobcat defense with a sack and several tackles during the contest. Javarese Black, Rick Hill and Jeff Felton all also had productive games on the defensive side of side of the ball for Dooly, combing for several tackles for loss. On offense, Zanders, Smith and Zeff Felton put up a good portion of the offensive output for the Bobcats with a few catches each. 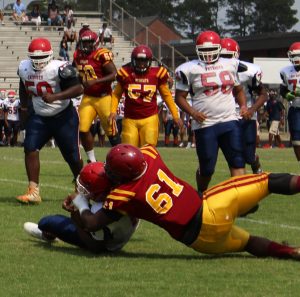 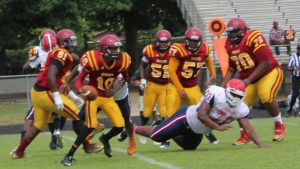 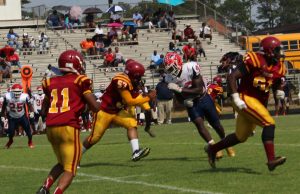 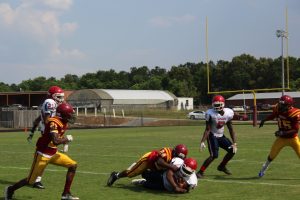 Tremekis Miller (24) tackles a Westover running back as other Bobcat players close in on the play. 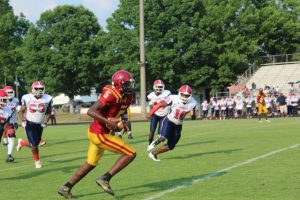 Dooly County’s Zeff Felton picks up some yardage after making a catch. 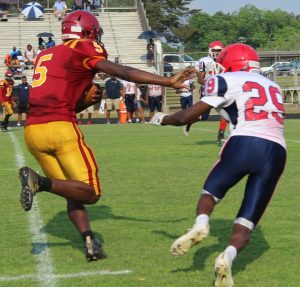