CORDELE- The Crisp County High School football team concluded their two weeks of spring practice with an inter-squad scrimmage on Friday night. The community was invited to come out with the price of admission just being either a drink donation or washing powder donation. Crisp County Head football coach Brad Harber called the scrimmage a success and was appreciative of the support from the community.

“We had a great turnout. We probably have enough soap and stuff for all of next season, so it turned out to be a really good thing,” said Harber. “I was super excited about the crowd we had.”

The scrimmage was a good way for the Cougars to close up spring football according to Harber.

“The game didn’t really tell you that much because we had some upcoming ninth graders that were playing alongside of guys that have started for a year or two. So we had to piece it together a little bit like that but it was a lot of fun. I wanted to divide the two teams up and have some fun for the spring game, you know, show people a little bit and let he community come support it,” Harber explained. “Just tried to have a nice ending to the spring prior to summer workouts. We really wanted to go back and work on fundamentals and stuff that we really needed to work on in our offseason.”

The Cougars will begin a packed summer schedule starting at the conclusion of the school year in preparation for the season to come.

“It is going to be a very competitive summer,” Harber says. “We have 7-on-7 tournaments in Valdosta and at Greater Atlanta Christian. We are also going to be doing a couple of padded camps now. We are taking the opportunity to do that in South Georgia and around Atlanta. We don’t get much rest in between, we just hop onto the next thing,” Harber added. “I really appreciate everybody in the community coming out to support the football program last Friday. We nearly had the whole home side stands full, and we as the football program appreciate all the donations that were made Friday,” he concluded.

All photos by Paula Paquette. 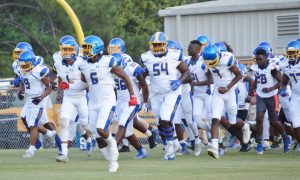 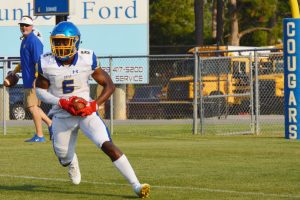 CCHS running back Jammie Robinson carries the ball during the spring game as Coach Harber watches from the background. 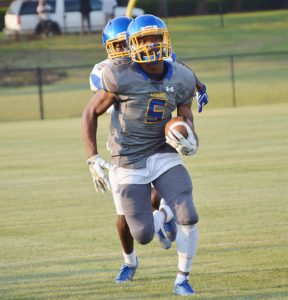 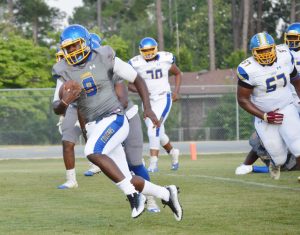 CCHS quarterback, Patrick Felton picks up yardage on the run. 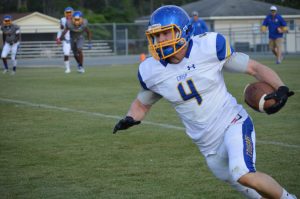 Receiver, Gaige Little, looks to take the ball up the field. 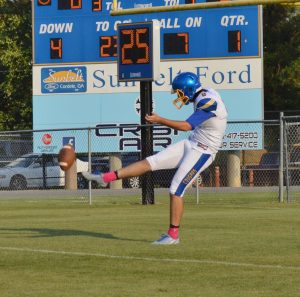 Bailey Barfield sends a punt up the field.