VIENNA- The Dooly County High School Annual Athletic Banquet was held in the high school cafeteria on May 14, 2018 at 6:00 p.m. The event began with a welcome by the Dooly County Schools assistant athletic director, Coach Minnie Harper. Following dinner the presentation of awards for all sports began.

Coach Corey Jarvis recognized the following members of the boys’ track team: TaTravian Haugabrook as Most Dedicated, Travis Glover as Most Improved and Reginald Smith as Most Valuable (competed at state).

In girls’ soccer, Coach Trenton Franklin recognized Yasmin Roblero with Iron Woman Award, Angela Lerma with the Coach’s Award and Brandy Lundy as the Most Valuable Player. He recognized in boys’ soccer: Carlos Paredes as the Best Defensive Player, Rody Velasquez with the Iron Man Award, Jose Cruz as the Most Valuable Player, and Abel Vega as the Best Offensive Player and with the Coach’s Award. 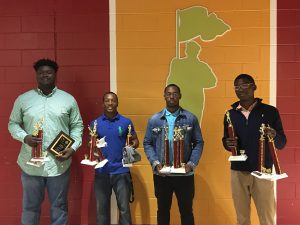 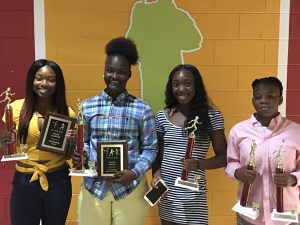 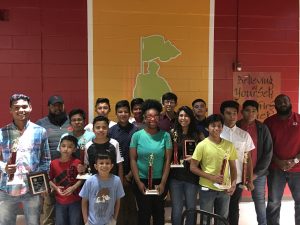 Members of the Dooly County High School boys’ and girls’ soccer teams with their awards on display.