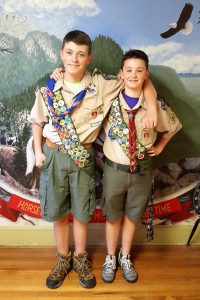 Cordele Boy Scout Troop 270 has two new Eagle Scouts. Reid Brinson and Michael Frost bring the number of members from the Troop that have earned Scouting’s highest award to twenty-nine since the Troop was first chartered in 1990. Each of the boys completed their Eagle Scout Board of Review on May 10, 2018. Under the guidance of Scoutmasters Robert Sears and John Frost, the boys rose through the ranks to attain the rank of Eagle Scout. Only 6% of Boy Scouts reach that rank.

Reid Brinson, son of Marilyn and Britt Brinson, is the 28th Eagle Scout in the history of Troop 270. He began his road to Eagle in 2008 as a member of Cub Scout Pack 270. In 2013, he crossed over to Boy Scout Troop 270. He has served as Troop Historian and Assistant Senior Patrol Leader.

Reid is a 2015 graduate of the National Youth Leadership Training program. He attended the 2017 National Scout Jamboree. Brinson is a Brotherhood member and currently serves as Lodge Training Chair for the Withlacoochee Lodge of the Order of the Arrow, Scouting’s National Honor Society. He has earned 43 merit badges. He is the grandson of Marilyn D. and the late William K. Elmore and the late Kay C. and Warren O. Brinson.

Michael Frost, son of Lee and John Frost, is the 29th Eagle Scout in the history of the Troop. He began his road to Eagle in 2013 when he joined Boy Scout Troop 270. He has held several positions of responsibility within the Troop, including Patrol Leader, Scribe, and Senior Patrol Leader.

Michael is a 2015 graduate of the National Youth Leadership Training program. He served as Patrol Leader at the 2017 National Scout Jamboree. Frost is a Brotherhood member and currently serves as Activities Chair for the Withlacoochee Lodge of the Order of the Arrow. He has earned 36 merit badges. He is the grandson of the late Patricia Ann and S. L. Eason and Judy and Roy Frost.

Michael’s Eagle Scout Project was a set of ten bird houses for the Wildlife Management Program at Argos Cement.

Troop 270 is sponsored by the Cordele First United Methodist Church and meets every Monday evening at 6:30 in the Cordele Boy Scout Hut, located at 1100 South 3rd Street. If you know of any boy ages 11-17 who may be interested in following trail blazed by these new Eagle Scouts, please have him come by the Boy Scout Hut on Monday evening or contact Scoutmaster John Frost, owner of Brady’s Best Buys, for information.