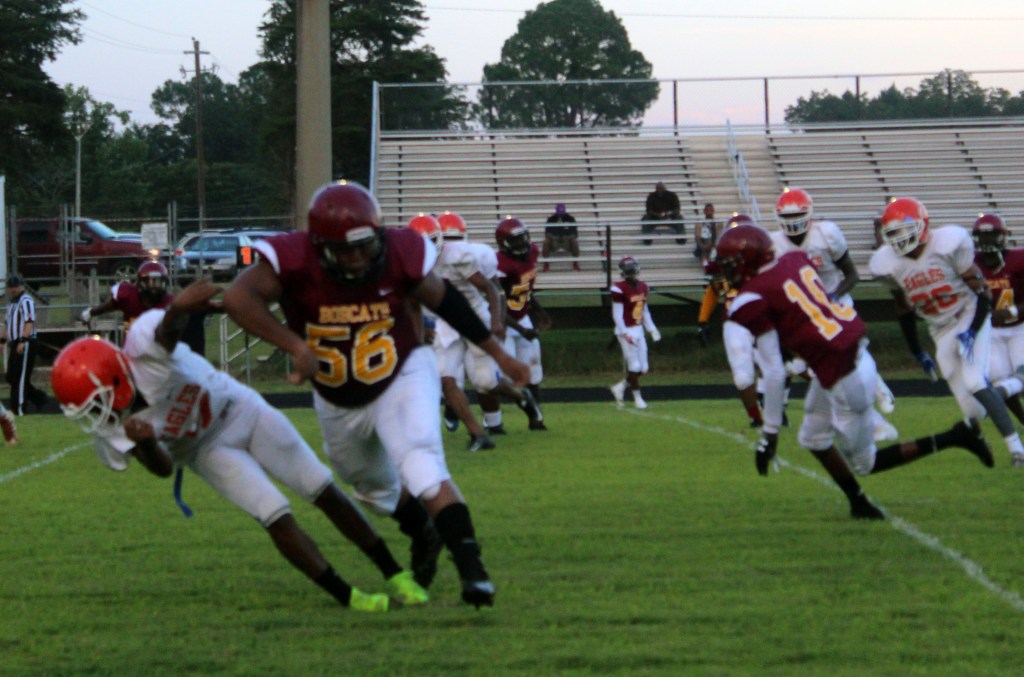 VIENNA- The Dooly County Bobcats squared off with the Columbia High School Eagles from Decatur on Saturday night for a preseason football scrimmage. The Bobcats came out on top in a physical contest in which both teams were called for a multitude of penalties.

Dooly started the game with possession of the ball and they got out to a great start with a run from Malik Burns of about 35 yards on the first play. On the next play, Bobcat quarterback, Bo Lawson, completed a pass to Reggie Smith for a solid pickup that got Dooly inside the Eagle 20-yard line. The Bobcats ended up getting down inside the Columbia five-yard line soon after, but the Eagles intercepted a deflected pass on the fourth and goal situation to stop the Bobcat drive.

The Eagles took over possession of the ball at their own 20-yard line after the turnover and went to work on a long drive for the first score of the game. They drove 80 yards on 12 plays using a mix of run and pass plays and capped off the long drive with a 20-yard touchdown pass to take a 7-0 lead with 4:10 remaining in the first quarter.

With the game being a scrimmage, special teams plays were limited, meaning there were no kickoffs, so the Bobcats started the next possession at their own 35-yard line. On the first play of the drive, Lawson hit Smith for what ended up being a 65-yard touchdown, but the play was called back due to a holding penalty. The Bobcats then scored another touchdown from about 43 yards out several plays later but another penalty canceled out the score. The subsequent play resulted in a long touchdown pass from Emaje Son to Shamon Zanders and this time the score counted. The extra point that followed was knocked through and the score was tied at 7-7 with a minute left in the first quarter.

Columbia took the ball out near midfield on the following drive, but the Dooly defense forced a punt aided by a couple of Eagle penalties.

The Bobcats took possession of the ball following the punt and used a five-play, 67-yard drive to take the lead. The biggest play of the drive came on a 25-yard pass from Lawson to Son, and a personal foul penalty on Columbia tacked 15 more yards onto that. Three plays later, Lawson hit Smith on a screen pass and the receiver followed his blocks and ended up scoring from about 25 yards out. The subsequent extra point put Dooly in front 14-7 with just over six minutes to play in the first half.

The Bobcat defense came out on the next series and immediately forced a fumble to set up their offense with good field position. The two teams then swapped defensive stops and the final play of the first half ended with the Eagles falling just short of scoring a potential tying touchdown, as the Dooly defense tackled an Eagle runner at the four-yard line as time expired in quarter number two.

Columbia started the second half with a decent drive down into Bobcat territory, but the Dooly County defense forced another turnover on downs after Burns sacked the quarterback for a big loss on fourth down.

The Bobcats ended up having another touchdown called back on the following drive, and then turned possession back over on downs to Columbia. Dooly County kept their lead at 14-7 entering the fourth quarter.

The backups played the majority of the final quarter for Dooly and the young Bobcats were able to hold onto the lead for a Dooly County win by the final score of 14-7.

Dooly opens up the regular season on Friday, August 24 at Worth County High School at 7:30.