Lady Cougars defeat Peach County, move to 3-0 on the season

CORDELE- The Crisp County High School softball team moved to 3-0 on the young season after their win over the Peach County Lady Trojans on Monday afternoon.

Peyton Adkins was the starting pitcher for the Lady Cougars in the game, and her teammates gave her plenty of run support to allow her to go after the Peach lineup.

After Adkins delivered a scoreless first inning, the Lady Cougars went to work with the bats with three runs in the bottom half of the frame. A two-out base hit from Riley Blampied followed by a walk from Megan Bloodworth put Crisp in business in the frame. Crisp County catcher, Jo Brady, then pushed the first three runs across the plate with a home run to left field. Crisp led 3-0 going into the second inning.

Adkins pitched a scoreless top of the second, and the Lady Cougars tacked on another run in the bottom half. Macy West led off the bottom of the second with a walk, and Rylee Little reached base next after being hit by a pitch. West subsequently stole third base and came home shortly after on an RBI groundout off the bat of Shelbi Cobb. Peach County was able to turn a double play to get out of the inning, but Crisp led 4-0 going into the third.

A scoreless top half of the third frame allowed the Lady Cougars to take a commanding lead in the bottom half. Ainslee Forsythe reached base with a single to left and Blampied then sent a ball over the fence in deep center for her second home run of the season to make the score 6-0. Brady and Olivia Taylor both reached base later in the inning, and Little then sent Brady home with an RBI double into the right field corner. Crisp entered the fourth inning with a 7-0 lead.

Peach County picked up their first and only run of the game in the top half of the fourth. The Lady Trojans had runners at first and third with two outs when a base hit to right field allowed the runner on third to score. The Lady Cougars kept it at just one run using some good defensive teamwork. Cobb relayed the ball in to Blampied, which then fired the ball to Bloodworth who tagged a Peach County runner out at third base to end the top of the fourth.

The Lady Cougars next added two more runs in the bottom of the fourth inning. Peyton Bozeman started the frame off by reaching third base after a Peach County error. Blampied came up with one out and hit a single to left to score Bozeman. Bloodworth and Brady each reached base next to load the bases, and Taylor sent Blampied home with a sacrifice fly to left field to make the score 9-1.

Adkins picked up two strikeouts in a scoreless top of the fifth inning to close out the win for the Lady Cougars. She ended the game having pitched five innings, and allowed just one run on four hits and one walk, while striking out three batters.

The Lady Cougars will face their toughest test of the young season on Wednesday (August 15) when they travel to Douglas to take on the Coffee County Lady Trojans at 5:45. Crisp will then be in Cordele for Watermelon Tournament games on Friday and Saturday. 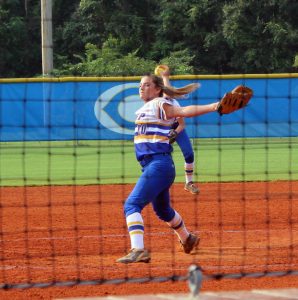