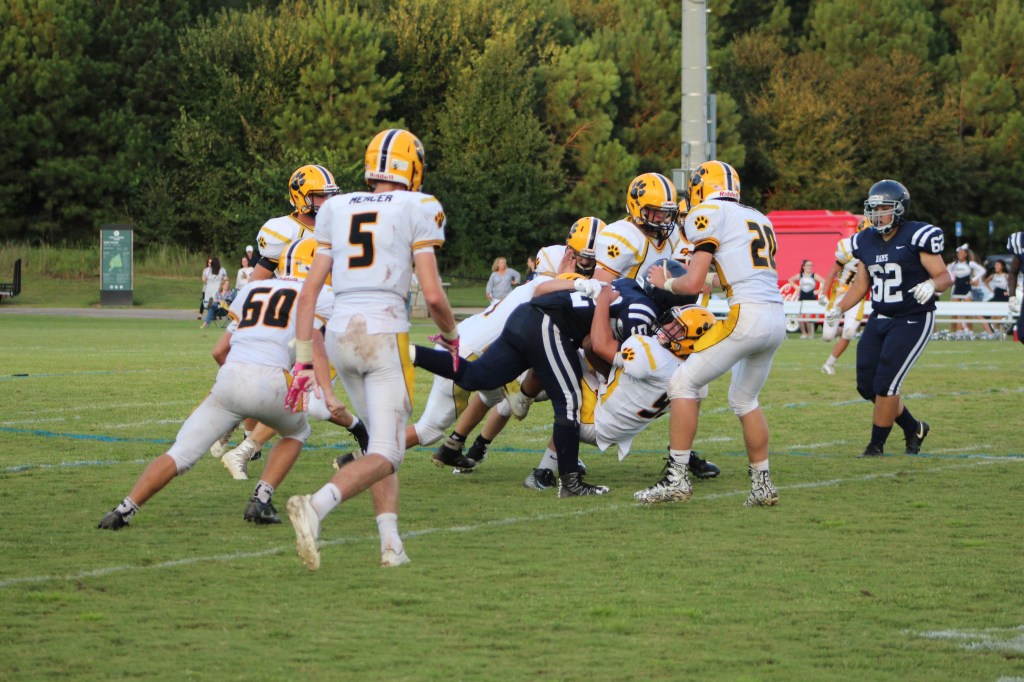 Jacob Odom (14) and Aubrey Brown (95) work together to tackle a Monsignor Donovan player in Friday’s game.

CORDELE- In their first game back to 11-man football since 2015, the Crisp Academy Wildcats fought hard to secure a win over the Monsignor Donovan Rams. The Wildcats were determined to defeat the Rams and kept that common goal in mind throughout the game on Friday night.

Monsignor Donovan kicked off to the Wildcats to the 25-yard line to open the game. The ball was quickly given over to the Rams after four short plays as the Wildcats were forced to punt the ball away, where it was then recovered on the other side of the field at the 23-yard line.

The short amount of time the Wildcats held the ball kept the Rams hopeful. After two first downs the Rams found themselves at the 42-yard line just out of reach of midfield. The rams stumbled back as the Wildcats held them on third and ten. With their last play of the drive, the Rams decided to punt the ball back to CA. This back and forth lasted less than three minutes, leaving 9:20 left in the first quarter.

Starting at the 30-yard line, the Cats pushed forward. They successfully made their way down the field, but with an incomplete pass on a second down, the Cats were forced to a third down attempt. The Cats were able to convert on the drive, however. With 6:32 left in the first quarter, Wildcat quarterback, Griffin Gravitt threw a pass to Baylor Pless for the first touchdown of the game. The Cats then went for the two-point conversion. Trey Williams scored the point after, as he was wide open for the two-point attempt, giving CA an 8-0 lead.

Monsignor Donovan kept the ball secure for the next three minutes with a few short passes, but with only a few minutes left in the first, the Cats did not let the opposing team gain any more yards. After the fourth down, the ball was subsequently given back to the CA Wildcats.

Keeping possession of the ball for the rest of the quarter, CA’s drive was carried over into the second quarter. In the next three plays, the Cats made their way from the Ram 35-yard line to the four-yard line. With the end zone in reach, Gravitt passed the ball to Noah Mercer for the second touchdown. At 10:02 left in the second quarter, the Wildcats had their lead at 14-0 and kicked the ball back to Monsignor Donovan out to the 45-yard line.

On the Rams’ first play of the drive, a runner slipped through the defense set up by the Cats and crossed over the goal line. The home team and audience members celebrated the score a bit too soon, however, and the referees called a penalty on the Rams, restarting the play. The Rams earned two more penalties and then fumble over the next couple of plays at about the 7:38 mark of the second quarter. At fourth and long, the Rams attempted a field goal but it fell just short of scoring.

In the next few plays, the ball made its way back over the goal line for a Wildcat touchdown with eight seconds until halftime, giving CA a sound 20-0 lead. Gravitt scored the touchdown on a 44-yard run.

The second half kickoff from the Wildcats to Monsignor Donovan was recovered on the three-yard line. The CA defense did not budge a yard, keeping the Rams ten yards from a first down for three plays. Eventually, the Wildcat defense earned a safety caused by Pless, giving them a 22-0 lead only 3:17 into the second half.

Turning possession back over to the Wildcats, the Rams kicked off the ball, which was returned to the MD 20-yard line. A penalty on CA pushed them back to the 34-yard line and restarted their first play of the drive. An 11-yard run by Dylan Farmer was the result of the next play but CA was pushed back by another penalty. A couple of minutes later, Gravitt passed the ball to Pless for a short touchdown. With 6:55 left, the Cats went for the two-point conversion again scored by Williams. CA then kicked the ball off to Monsignor Donovan, leading 30-0.

Monsignor Donovan had a hard time getting the ball down the field once again. At the 48-yard line, the Rams suffered an incomplete pass, then Mercer knocked down the next pass. The Rams then received another penalty on their fourth down. Unable to recover on the drive, the Rams gave the ball back over to CA.

After a shaky first few plays on the next Wildcat possession, Gravitt ran for 20 yards in two consecutive plays. On first and goal, the Cats received a penalty knocking them back five yards to the 11-yard line. With 1:12 left in the third quarter, another pass from Gravitt to Pless earned the Cats another touchdown. A penalty on the Rams for offsides gave the Cats a chance to retry the failed two-point conversion, but ultimately the conversion was unsuccessful.

The Rams ended the third quarter with possession of the ball. They held the ball for the next 9:35 of the game. Near the end of the game, the Rams went for a field goal, but the kick fell short.

The Crisp Academy Wildcats have an open week this week, but they will be using that time wisely to prepare for their next game against region opponent Southwest Georgia Academy. 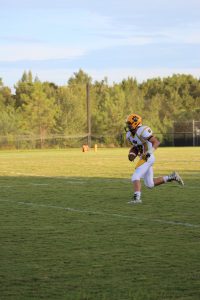 Billy Hardin takes possession of the ball and gains some yards during Crisp Academy’s win on Friday night.