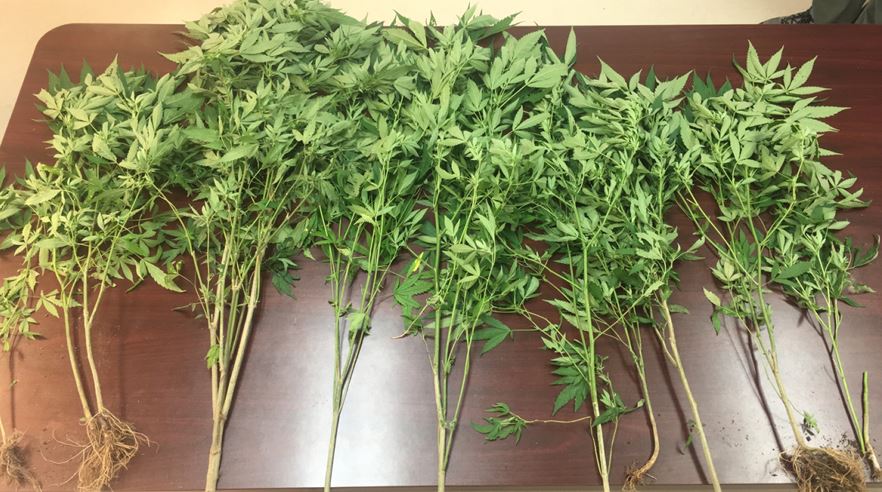 Deputies with the Crisp County Sheriff's Office along with Mid-South Drug Task Force agents recovered these suspected marijuana plants near a residence at 727 Cork Ferry Road on Thursday.

Investigators with the Crisp County Sheriff’s Office and the Mid-South Narcotics Task Force arrested a Dublin man and recovered 11 suspected marijuana plants behind a residence at 727 Cork Ferry Road on Thursday.

After receiving complaints of possible illegal drug activity occurring at the residence, the Crisp County Sheriff’s Office and the Mid-South Narcotics Task Force started an investigation. During the investigation several suspected marijuana plants were found growing in an open field behind the house. Law enforcement officers began surveillance of the plants and 59-year-old Doug Dewitt was reportedly witnessed going to the plants on different occasions.

Dewitt is known to agents and deputies as he had just been released from detention for possession of methamphetamine and criminal trespass charges a few weeks earlier. When CCSO deputies and Task Force agents served a search warrant on Thursday, Dewitt was not there, but eleven marijuana plants were recovered in the woods behind the residence along with drug paraphernalia from inside the residence.

Officers also found 39-year-old Brian Shirley of Dublin, Georgia inside the residence. Shirley has active warrants in Clark County, Georgia and was detained on the unrelated charges. Deputies are currently searching for Doug Dewitt for manufacturing marijuana charges. The 11 plants seized were capable of producing up to one pound of marijuana each.