CORDELE- The Crisp County Lady Cougars played their first region 1-AAA softball game of the season at home on Thursday (August 23) afternoon against last season’s region champs, the Worth County Lady Rams. Crisp County built a lead in the early innings before pulling away towards the end of the game.

Rilee Duckworth was in the circle again for the Lady Cougars and pitched a three up, three down, top of the first inning to get Crisp off to a good start.

Ainslee Forsythe reached first base with one out in the bottom of the first and moved up to second after a wild pitch. Crisp County shortstop, Riley Blampied, took advantage of the early run scoring opportunity and hit an RBI single to centerfield to score the base runner for the early 1-0 lead.

The Lady Cougars added four more runs to their early lead in the bottom of the second. Peyton Bozeman drew a walk with one out and Shelbi Cobb was hit by a pitch in the next at bat to put two Crisp County runners on base. Webb hit into a fielders choice groundout to third base that left Cougar base runners on first and second with two outs. Forsythe next drew a walk to load the bases and then Blampied hit a ball into the outfield that fell between two Lady Rams and allowed all three runners to score. Blampied later scored in the inning after an infield hit from Megan Bloodworth. Crisp County led 5-0 going into the third inning.

The score remained at 5-0 in favor of Crisp County over the next few half innings. Duckworth then struck out the side in the top of the fifth and the Lady Cougars increased the lead to 6-0 in the bottom half. Bozeman reached base after being hit by a pitch with one out and subsequently moved up to second on a sacrifice bunt by Cobb. An infield hit from Webb then led to a Worth County error, which allowed Bozeman to score the sixth Crisp County run of the contest.

Worth County got a leadoff single in the top of the sixth still looking to get on the scoreboard, but the next batter lined out to Blampied, who threw to Olivia Taylor at first base to complete a double play. A groundout right back to the pitcher ended the top of the sixth frame and the Lady Cougars finished the game off with two runs in the bottom half.

Blampied led off the inning with a home run to left field to make the score 7-0. Bloodworth then reached base on a single, before Taylor and Macy West reached to load up the bases. Bozeman then picked up the game-ending RBI on a hit by pitch to finish the game off for a run-rule 8-0 win in six innings.

The Lady Cougars have two home games scheduled for next week, Tuesday at 5:45 against the Tift County Lady Blue Devils, and Thursday’s region contest with Cook County, also at 5:45. 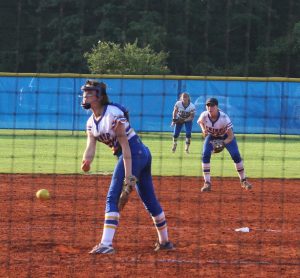 Rilee Duckworth delivers a pitch, while Riley Blampied and Kirin Webb get ready on defense. 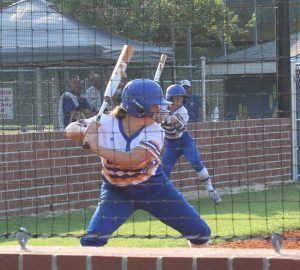 Crisp County’s Olivia Taylor up to bat in the game vs Worth.