Dooly opens season with road win over Worth County 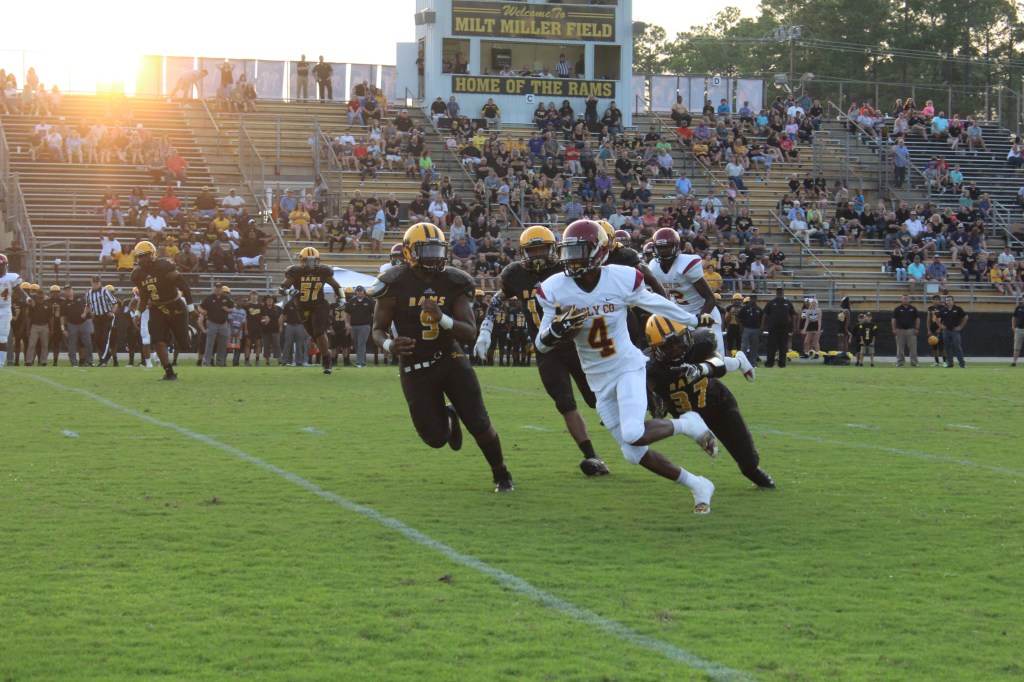 Shamon Zanders avoids Worth County defenders as he picks up yardage during Friday night's game.

SYLVESTER- The Dooly County Bobcats opened up the 2018 football season on the road at Worth County on Friday night. The Bobcats jumped out to an early lead before the Rams eventually ended up giving them a fight, but Dooly ultimately came up with a 33-14 win led by a big night from their offense.

The Bobcats got on the scoreboard just 18 seconds into the game on a touchdown run from quarterback Bo Lawson from around 60 yards out. Osbell Vasquez made the extra point to put Dooly up 7-0 with 11:42 to play in the first quarter.

Worth County then fumbled possession away on their first offensive play of the night to set the Bobcats up with good field position after the recovery by Rashad Lucas. The Rams took possession right back a couple of plays later on a Dooly fumble, however. The Bobcat defense then quickly forced a Worth County punt on the subsequent drive, led by tackles from Tremekis Miller and Malik Burns.

The teams traded two more defensive stops until the Rams put their first points on the board later in the first quarter on a five-yard touchdown run. The score tied the game at 7-7 with 2:15 to play in the first quarter. Dooly stalled out on their next drive and had to punt the ball away to the Rams just before the start of the second quarter, but the second period would end up being a productive one for the Bobcats.

Burns and Javarese Black combined for three consecutive tackles for a loss of yardage for the Dooly defense and forced the Rams into another punting situation. Reggie Smith received the punt near his own 45-yard line and made a couple of moves on his way into Worth territory down to about the 28-yard line. The Bobcats quickly made the good field position count, as two plays later Lawson threw to Shamon Zanders, who out jumped a Worth County defensive back to reel in a 33-yard touchdown reception. The extra point try was unsuccessful after a bad snap, but the Bobcats had the lead at 13-7 about two minutes into the second quarter.

The Bobcat offense went right back to work after forcing another Ram punt. Dooly took over at the Worth County 46-yard line on their following drive and got an eight yard run from Malik McGhee to set up a third down and medium attempt. The Bobcats ended up not needing a first down on the drive, however, as Lawson found Reggie Smith for a 43-yard touchdown on the third down play to put Dooly ahead 19-7. Lawson threw a pass to Zepha Hill for the two-point conversion to make the score 21-7 in favor of Dooly County with 7:17 to play in the first half.

Burns, Black, Hill and Miller all the led the next charge for the Bobcat defense as they forced another punt from Worth County. The Bobcats took possession and drove down to the Worth 15-yard line before they turned the ball back over to the Rams on downs.

The Dooly defense subsequently forced another quick punt from Worth County and gave the offense one more chance to add to the lead before halftime. The second play of the drive ended in a 50-yard touchdown run from Lawson to put Dooly up 27-7 entering halftime.

The Rams came out with some fight in the second half with a long drive that finished with a short touchdown run. The score was 27-14 in favor of Dooly with 5:44 to go in the third quarter.

The teams swapped defensive stops for the next several drives until Lawson finally put the game out of reach with a 53-yard touchdown run about halfway through the fourth quarter. Dooly had a 33-14 lead with 7:15 to go in the game.

Worth County scored one final touchdown with 4:23 left in the game, but the Bobcats were able to run the clock out from there to win by the final score of 33-21.

Lawson led the Bobcats to the win with a big night offensively with five total touchdowns, three rushing and two passing, and 335 total yards. Smith caught three passes for 68 yards and one touchdown and McGhee finished the night with 75 yards on 10 rushes.

The Bobcat defense was led by Burns, who finished the night with 19 total tackles and two sacks. Hill finished the contest with 12 tackles and a sack. Black also had a big night on defense with 10 tackles and one sack. Miller finished with five tackles, all for a loss of yards. Jacquez Hardrick and Ra’Quavius Billings each caused Worth County fumbles in the game.

The Bobcats host Fitzgerald High School next Friday night at 7:30 in Vienna. 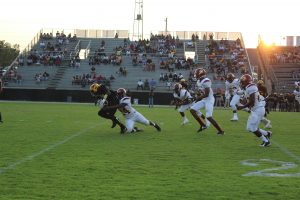 Tremekis Miller tackles a Worth County running back. 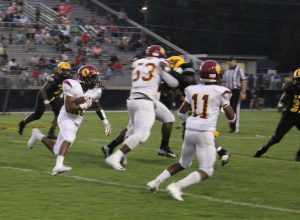 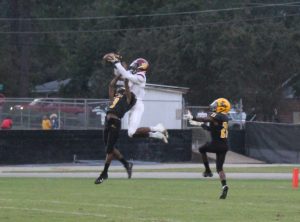 Shamon Zanders out jumps a Worth County defensive back to pull in a touchdown pass from Bo Lawson.