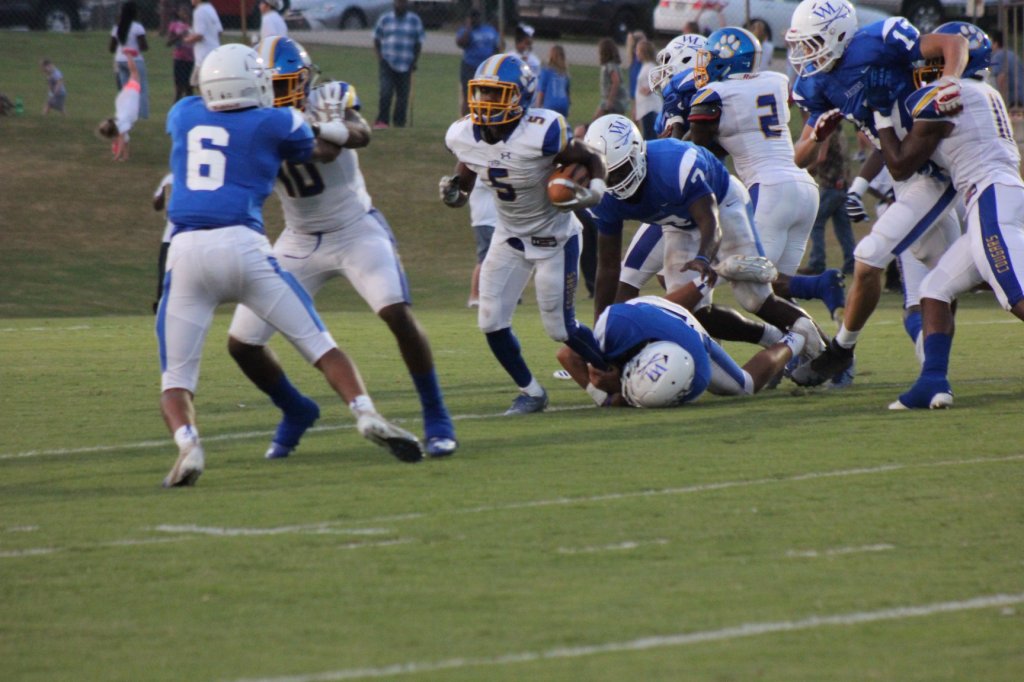 Tubby Spivey (5) carries the ball for the Cougars, as teammates Ahdarrious Gee (10) and Camion Snead (2) block West Laurens defenders in an attempt to clear a path.

DUBLIN- With the Crisp County Cougars losing a 16-0 game against the West Laurens High Raiders in Dublin on Friday night, the question beckons, what happened?

To begin with the Raiders took the opening kickoff 91 yards to the house. With 14 seconds gone in the game, the Cougars trailed 7-0. It was at that point that the capacity crowd saw an awesome defensive struggle as both the Cougars and West Laurens were entrenched on defense and not giving up many yards. Senior punter for Crisp County, Bailey Barfield, may well have set a record for total punts with 11 for a 30.5-yard average on Friday night.

There were some bright spots in the Cougar offense. Quarterback, AJ Lofton broke for several good runs and completed some nice throws, but every time Crisp appeared to get something started offensively the West Laurens defense would rise to the occasion. As the first half drew to an end, the Raiders were able to put together a short drive, which resulted in a field goal and a 10-0 lead for the hosts.

In the second half the Cougars got the ball to start and were forced to punt. After holding the Raiders and forcing another punt, Crisp had an excellent return by Jaylin Epps erased on a controversial call of blocking in the back. The Cougar offense could not get anything going on the drive that followed and they punted to West Laurens once more.

On the Cougars’ third possession of the second half, a wayward pass from Lofton found a lone Raider defender by the sideline. At this time early in the fourth quarter, the Raiders lined up to run what looked like the same bubble screen they had already run numerous times previously in the game. The quarterback instead looked off the usual target and then threw deep to his big receiver, Brett Card, which resulted in a 60-yard touchdown bomb. The point after was no good but West Laurens had opened up the scoring. Finally, the Cougars recovered a muffed punt by the Raiders at the 22-yard line, but it was a brief positive note, however, as Crisp turned the ball over on downs shortly after. The game ended soon after with the Raiders on top 16-0.

“I was pleased with our efforts on defense” said second year Head Coach, Brad Harber. “The guys played well and stuffed their offense many times, but our offensive struggles hampered us all night. We have some things to fix on offense and we are going to require some very young players to step up and take charge,” added Harber.

No defensive stats were available but seniors, Ahdarrious Gee and Tubby Spivey, led the Crisp County defensive unit. Sophomore Chris Paul was a key contributor as well with several tackles on the night.

When asked about their upcoming opponent, Dutchtown, Harber said, “They run a very similar offense to us and they have a really good linebacker and defensive end to go along with two high end special teams guys.” 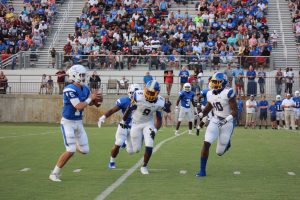 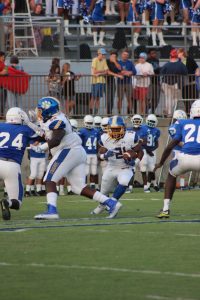