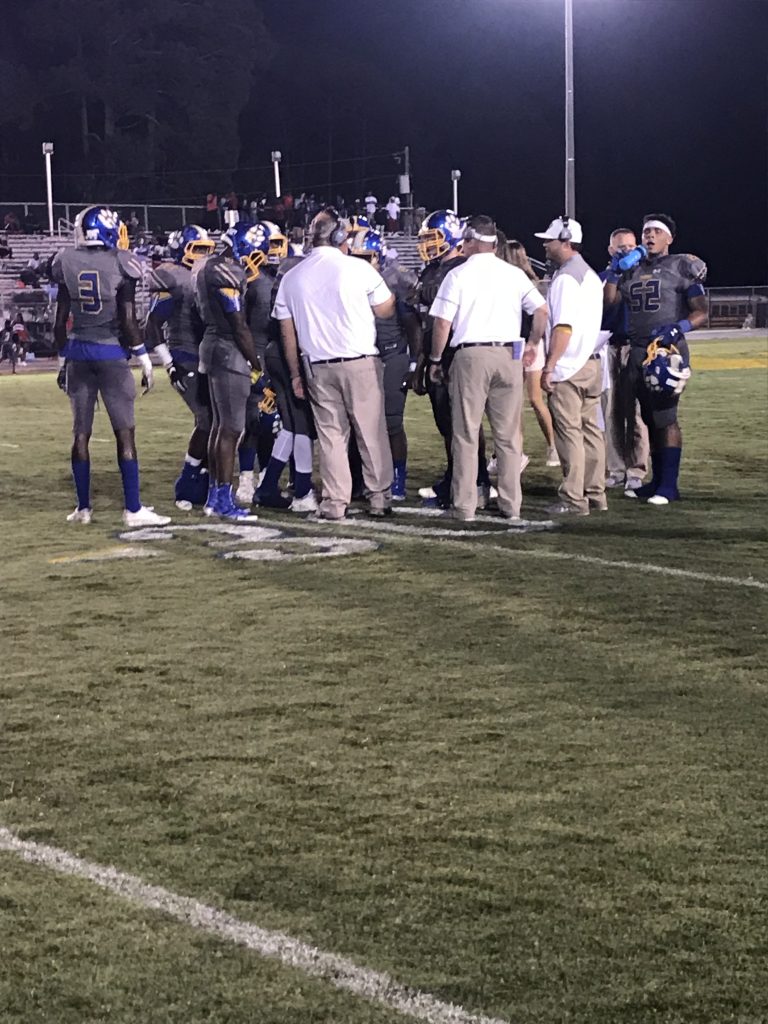 Crisp County coaches talk to the players during a timeout in the first half of Friday night’s game.

Dutchtown Bulldogs come away with 28-3 victory in Cordele after storm forces delays.

CORDELE- The Crisp County Cougars welcomed the Dutchtown Bulldogs to Cordele on Friday night for what ended up being a weather delayed contest that saw the Bulldogs leading 14-3 in the middle of the third quarter when the game was halted due to a storm. Lightning had already delayed the opening kickoff by about an hour, and a storm blew in during the second half of the game and forced the game to go deep into the night. Dutchtown ended up taking the win by a final score of 28-3.

The Cougars won the coin toss and decided to kickoff to Dutchtown to start the contest. The Bulldogs got the ball into Cougar territory shortly after, but a tackle for loss by Crisp defensive linemen, Nick Mercer and Jaquan Bass, drove Dutchtown back and some good pressure by the Cougar defense on the next couple of plays led to a Bulldog punt.

The teams swapped punts over the next couple of possessions as neither offense could sustain a drive for more than a few plays.

Dutchtown took over possession of the ball at their own 15-yard line with five minutes to play in the first quarter after a good kick from Crisp punter, Bailey Barfield. The Bulldogs went to work from there driving all the way down the field for the first score of the night. Dutchtown quarterback, Arendez Fedd, led the scoring drive with some decent runs and a couple of big pass connections. The biggest play of the drive came on a pass from Fedd to receiver, Travon Jones, for a pickup of around 25 yards. The scoring drive was capped off with a touchdown pass from Fedd to Nate Mccollum from 17 yards out. The point after was successful and the Bulldogs led 7-0 with just over a minute to go in the first quarter.

The Cougars were forced to punt again near the end of the first quarter, but their defense made a big play about 30 second into the second period to give the offense a scoring opportunity.

Dutchtown fumbled possession away on the second play of the quarter and Preston Levant was credited with the recovery to give the Cougars the ball. The fumble set the Crisp County of­fense up deep in Bulldog territory, but the Dutchtown defense did just enough to hold the Cougars to a field goal at­tempt. Connor Richmond knocked the field goal through from 30 yards out to put Crisp on the board. The Bulldogs led 7-3 with just over 10 minutes to play in the first half.

Dutchtown picked up another touch­down on a 12-yard touchdown run from Ja’shaun Poke to take a 14-3 lead midway through the second quarter.

The Cougars got a drive going late in the first half in an attempt to get anoth­er score on the board before halftime, but the Dutchtown defense held them on fourth down, so the Bulldogs went in at half up 14-3.

A long weather delay forced the game to be picked back up around 11:15 p.m. and the Bulldogs tacked on two more touchdowns from there to win by a final score of 28-3.