CORDELE- The Crisp County softball Lady Cougars picked up two wins this week, including a big region win 3-2 over Cook County Thursday afternoon, but first up was a game versus Tift County.

Crisp hosted Tift County on Tuesday afternoon in a rematch of a game from the previous week. Tift won the first game between the two teams 7-6 last Tuesday (August 21) in Tifton, but the Lady Cougars avenged one of just two losses so far this season by winning the rematch against the Lady Blue Devils by a final score of 4-1.

Crisp County pitcher, Rilee Duckworth, and Tift’s pitcher, Paige Hill, contested a hard-fought pitcher’s duel for most of the game. Tift County got a leadoff runner on base in the top of the first inning after Alaina Stephens drew a walk. A fly out to left followed by a nice play by Crisp shortstop, Riley Blampied, on a ground ball gave Tift County two outs in the inning. A two-out walk gave the Lady Devils runners at first and second, but Duckworth struck out the next batter to send the game to the bottom half of the first.

Ainslee Forsythe picked up a one-out single into shallow left field for the first Crisp base runner of the contest, and Blampied came up next with a fly ball that was caught right in front of the outfield fence in center. Hill got Megan Bloodworth to pop up to short for the final out of the scoreless first inning.

Duckworth then pitched a three up, three down top of the second inning, and the Lady Cougars got on the board in the bottom half of the frame. Olivia Taylor came up with a one-out double and came around to score shortly after on an RBI single by Peyton Bozeman to make the score 1-0 in favor of Crisp heading into the third inning.

The Lady Devils tied the score in the top of the third with their only run of the game on a home run by Stephens to center. The Lady Cougars quickly retook the lead in the bottom half of the frame, however, as Blampied hit a solo home run of her own to right center.

Tift County threatened to tie the score in the top of the fourth and fifth innings, as they got the leadoff runner on base in each. In the top of the fourth, the Lady Devils got a base hit to left, but the runner was picked off at first base shortly after on a throw from the catcher. They later picked up a double from Niambi Battle, but Duckworth finished off the threat in the fourth with a strikeout.

Tift picked up a leadoff walk to start the top of the fifth, but Duckworth added another strikeout for the first out of the inning. The third batter of the frame lined out to Blampied at short, and Blampied then threw to Taylor at first base for the double play to end the inning.

The teams traded two more scoreless half innings and the Lady Cougars then added a couple of insurance runs in the bottom of the sixth.

Bloodworth reached on a Tift County error with one out in the bottom of the sixth and then stole second. Jo Brady followed with an RBI double to right field that sent Bloodworth home, and Taylor subsequently scored Brady with an RBI single to make the score 4-1.

Duckworth ended the game with a three up, three down top of the seventh to finish off the Crisp County win. She pitched all seven innings, allowing just one run on three hits and two walks, while striking out seven batters.

The 3-A state runners-up from last season, Cook County High School Lady Hornets, made the trip to Cordele on Thursday for the first of three region matchups between the two teams this season.

Cook County got on the board first with a run in the top of the first inning to take an early lead. They added another in the top of the third frame after a walk, a double and a sacrifice fly, but the second run would be their last.

The Lady Cougars made a comeback in the bottom half of the third on a three-run home run. Webb reached base with one out in the inning after a single to right field, and Fosythe put down a sacrifice bunt to move the runner up to second. Blampied came up to bat next, but the Lady Hornets wanted no part of pitching against the ever-dangerous junior shortstop, so they intentionally walked her to give Crisp runners at first and second with two outs. The decision ended up being productive for the Lady Cougars, however, as Bloodworth got a good pitch to hit in the subsequent at bat and sent a three-run home run to deep left center to give Crisp a 3-2 lead.

Duckworth and the Crisp defense shut down Cook County from there, allowing just one base runner for the remainder of the game.

Bloodworth finished the game with two hits in three at bats, including her three-run homer that ended up being the game winner.

Duckworth added another win to her record with seven innings pitched, in which she allowed just the two Cook County runs on five hits and two walks while striking out five Lady Hornet batters. 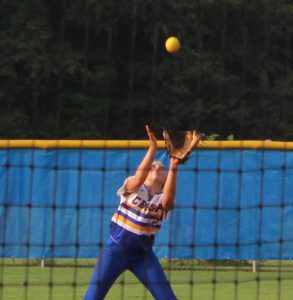 Ainslee Forsythe gets under a pop fly for an out during a game earlier this season.