Wilcox moves to 2-0 with shutout win over Hawkinsville 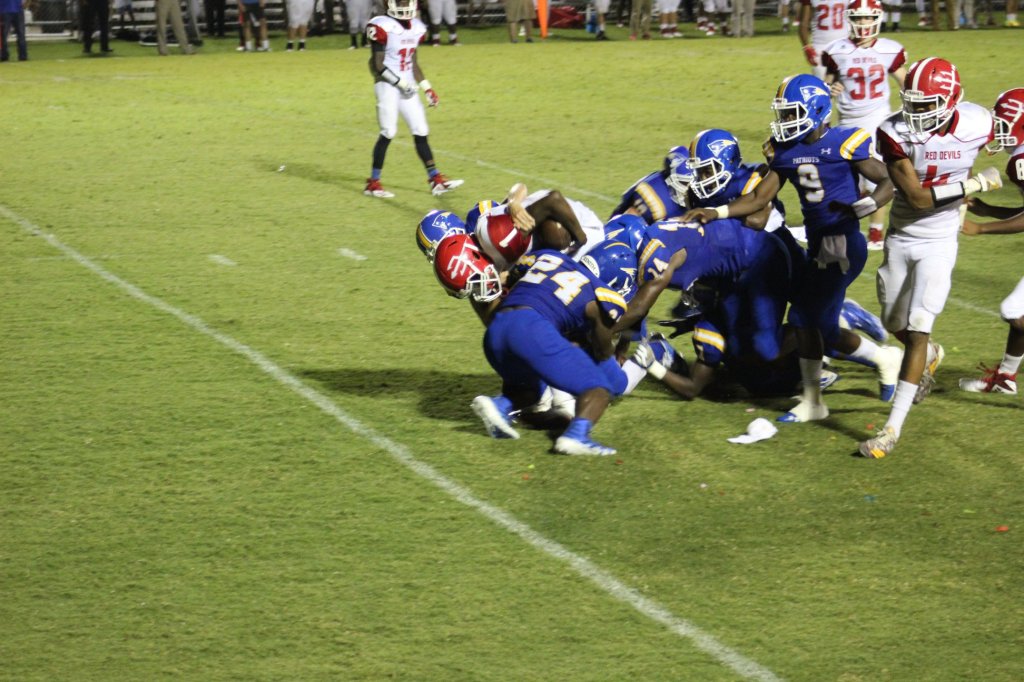 ROCHELLE- The Wilcox County Patriots are out to a 2-0 start to the 2018 football season after Friday night’s 23-0 win over their rivals, Hawkinsville High School.

The Patriots started the game with possession of the ball, but they were held to a quick three and out, forcing them to punt to the Red Devils. Hawkinsville was also forced to punt on their first possession of the game, and Matt McAdoo put the Patriots in decent field position with a 17-yard run back.

The teams then swapped turnovers on the following three possessions over the next couple of minutes. Hawkinsville came up with an interception on a Wilcox pass with about 7:59 to go in the first quarter. The Red Devils then fumbled on their very next play and Desmond Tisdol was credited with the recovery for the Patriots. Three plays later, Hawkinsville came up with another interception, and then put a long drive together deep into Wilcox territory.

The two offenses struggled for the remainder of the first half with several more punts and turnovers. Hawkinsville attempted a 32-yard field goal late in the first half looking for the first points of the night, but the kick was unsuccessful so the teams went in at halftime tied at 0-0.

The Patriots came up with a big special teams play early in the second half to put the first points of the night on the scoreboard. Hawkinsville started the third quarter with possession of the ball but they were quickly forced into a punting situation after tackles by Wilcox defenders, Lagan Luke and Justin Moore, prevented the Red Devils from picking up a first down. The punt attempt was then blocked and Azavion Deans came up with the recovery in the end zone for a Wilcox touchdown. Manny Carrillo made the subsequent point after to put the Patriots up 7-0 just over two minutes into the second half.

The Hawkinsville offense was backed up deep in their own territory on the very next possession, and the Patriots ended up forcing a safety on another Red Devil punt attempt to make the score 9-0 in favor of Wilcox with around six and half minutes to go in the third quarter.

Tisdol punched in a short touchdown run later in the third quarter and added a two point conversion run to put Wilcox in front 17-0 heading into the fourth quarter.

Hawkinsville opened the fourth quarter with possession of the ball, but they were forced to punt once again.

The Patriots started with possession of the ball at their own 30-yard line on the subsequent drive. Runs by Moore and Noah Hollingsworth moved the ball out near midfield over the next four plays, and Hollingsworth then capped off the drive with a 51-yard touchdown run to put Wilcox up 23-0 with 8:21 to play in the game.

The game ended with less than three minutes to go due to weather, so the Patriots finished on top by the final score of 23-0.

Branson Owens led the Wilcox defense with eight total tackles and a fumble recovery. Lagan Luke and JayQuan Brown both added seven total tackles, including a couple of tackles for loss each. Cameron Patterson and Ahmad Johnson also made big contributions on the defensive side of the ball.

The Patriots will look to keep their early season win streak alive when they go on the road Friday to take on a 2-1 Berrien County squad. 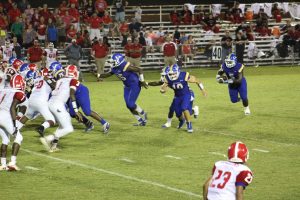 Jacquarius Dixon runs behind a wall of blockers, including Ahmad Johnson (75) and Branson Owens (10).