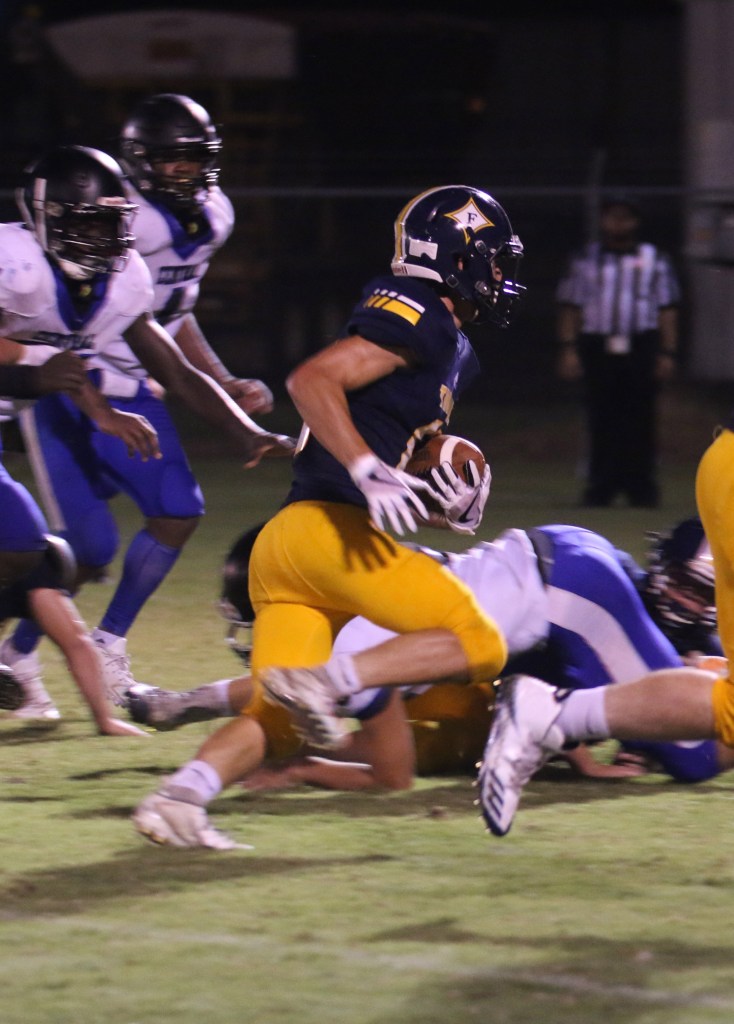 Caleb Keyhayes runs with the ball during Friday night’s game. He finished the night with 19 carries for 203 yards and three touchdowns.

PINEHURST- The Fullington Academy Trojan football team picked up their first win of the season on Friday night when they hosted the Central Christian Crusaders out of Sharpsburg, Ga. Central led 16-0 at halftime, but the Trojans made the necessary adjustments during the break to come from behind and win the game 24-16.

“The first half we had a lot of self-inflicted wounds, stopping drives, and turnover issues. We still had some good things happen in the first half, but every drive we just ended up getting a penalty or a fumble and it would stall out,” said Fullington Head Coach Edward Bradley. “We made adjustments for the second half, blocking and formation wise, and protected the ball number one, and we were able to move it pretty much at will in the second half.”

Caleb Keyhayes scored all three touchdowns on the night for the Trojans, and Coach Bradley made note of his effort during the second half.

“Caleb Keyhayes scored all three of the touchdowns for us. They all came in the second half. He stepped up huge with 19 rushes for 203 yards with the majority of those coming in the second half,” said Coach Bradley.

“We saw some things, little blocking adjustments here and there, that just opened up some huge holes. We could have done the same thing in the first half but for some reason we just let it kind of get away from us,” he added.

The Trojan defense was a big part of the comeback victory as well, according to Coach Bradley.

“Our defense played amazing the whole game. We gave up two touchdowns, which were more of our fault. The defense held them in total to 131 yards of offense. So I can deal with that, I am okay with that,” Coach Bradley explained.

One of the biggest keys in the second half comeback was a couple of late turnovers Fullington forced to take control of the game.

“The game was tied late and Central dropped back to pass when Brooks Hendrix intercepted the ball giving us possession in Central territory. Then we were able to drive down and score,” explained Coach Bradley. “Then on the following drive, Trey Miller was able to come up with an interception that pretty much sealed the deal. We ran the clock out after that point.”

Last, but certainly not least, Coach Bradley pointed out how important his defensive ends were for the Trojan defense during the 24-16 win.

“Our ends played spectacular, we kept their quarterback on the run all night long. I think we held him to a negative rushing total,” Coach Bradley said. “He liked to run, sprint out and everything else, and our ends, Josh Hendrix and Nelson Clements did an awesome job.”

Fullington is off this week and will be in action again next Friday (September 14), where they will try to make it two wins in a row.

“We won, so hopefully this will be a big turning point for us. We have this week off and then the following week we play ACE (Academy for Classical Education) in Macon,” Coach Bradley concluded. 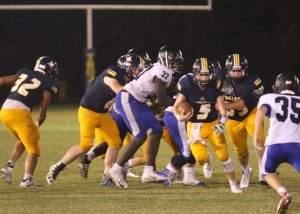