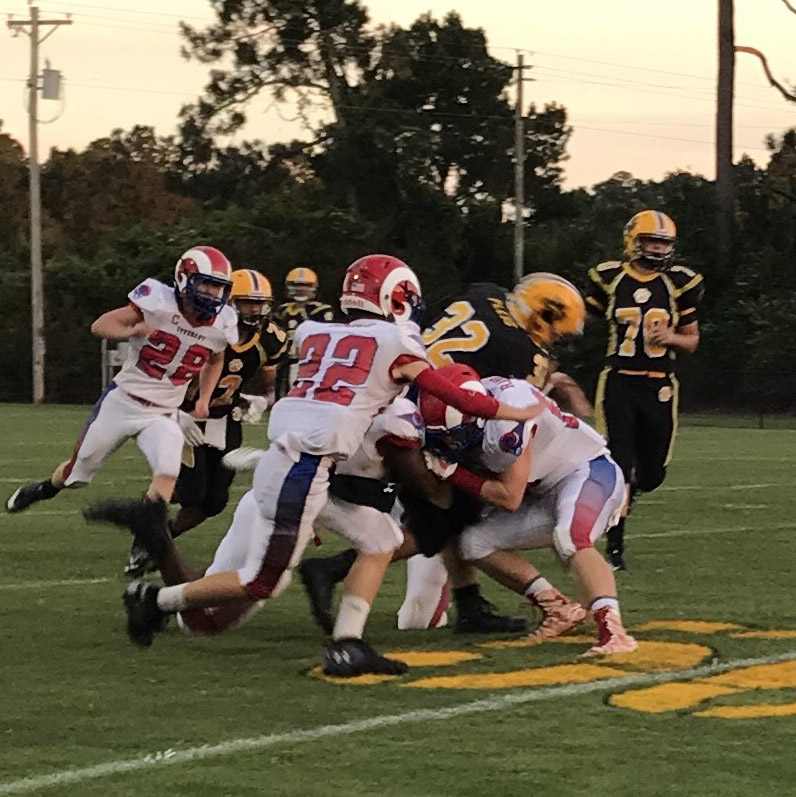 CORDELE- After their first loss of the season last week against SGA, Crisp Academy redeemed themselves at their second home game by beating Covenant Academy in a shutout. On Friday night CA ended the night with 40 points on the board.

Covenant kicked off to CA to the 37 yard-line at the start of the game, but three plays and a flag later, CA found themselves at fourth and 17 to go. A 27-yard run from Dede Lawrence put CA back at first down. Soon enough, the team was at the 40-yard line and a pass from quarterback Griffin Gravitt to Baylor Pless gained them 22 yards. On the next play, Lawrence ran the ball, but a misstep caused a fumble. Quickly, Lawrence regained possession of the ball and ran it to the five-yard line. With 8:24 left in the first quarter, Dylan Farmer earned a touchdown followed by a successful two point conversion by Gravitt to put Crisp up 8-0 early.

The next return left the ball at the 39-yard line. After a short drive with the ball in possession of Covenant, Farmer intercepted a pass at the 40-yard line. Some penalties pushed CA back to the 30-yard line, but they would not let that stop them. On third and 22 to go, Griffin Gravitt passed the ball to Garrett Gravitt for 16 yards. A fumble recovery by Luis Martinez led to a first down and a few short plays later, Griffin Gravitt passed the ball to Pless to gain 29 yards, landing Crisp at the 15 yard-line. After a small pushback, Griffin Gravitt threw again to Pless for a touchdown with 20 seconds left in the quarter. With a successful two-point conversion by Farmer, CA led 16-0.

Covenant’s possession was short lived as the ball went back to CA after a short drive. Two penalties on Covenant etched CA closer to the goal line and in two plays, a pass from Griffin Gravitt to Farmer earned another touchdown. With a successful conversion by Pless, CA led 24-0.

The possession switched back and forth until a knocked down pass by Griffin Gravitt led to an interception by Farmer a few plays later. The interception marked the end of the first half.

In the third quarter, CA kicked off to Covenant to the 49-yard line. A few minutes later, an interception by Lawrence switched possession back to CA. Then after a few plays, Griffin Gravitt threw a 25 yard pass to Trey Williams for a first down at the 15-yard line. The next touchdown came with 5:52 left in the quarter and was scored by Farmer. Griffin Gravitt then pulled off another successful conversion that gave Crisp a 32-0 lead.

After being pushed back to 22 yards to go in their next possession, Covenant suffered another interception by Pless which led to a 50-yard touchdown that was recalled because of a penalty. With 1:37 left in the third quarter, Farmer knocked down a pass on a Covenant fourth down play causing a turnover on downs.

The third quarter ended with two consecutive passes from Griffin Gravitt to Williams for 54 yards in total.

Farmer then earned another touchdown followed by a conversion from Griffin Gravitt to put the final score at 40-0. The Wildcats ran out the clock from here to finish the game.

Crisp Academy improved their record to 2-1 so far this season. CA plays an away game next week against Thomas Jefferson Academy. 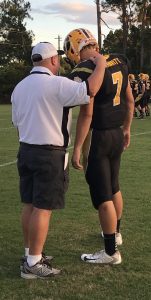