Cougars fall behind early in loss to Tift County 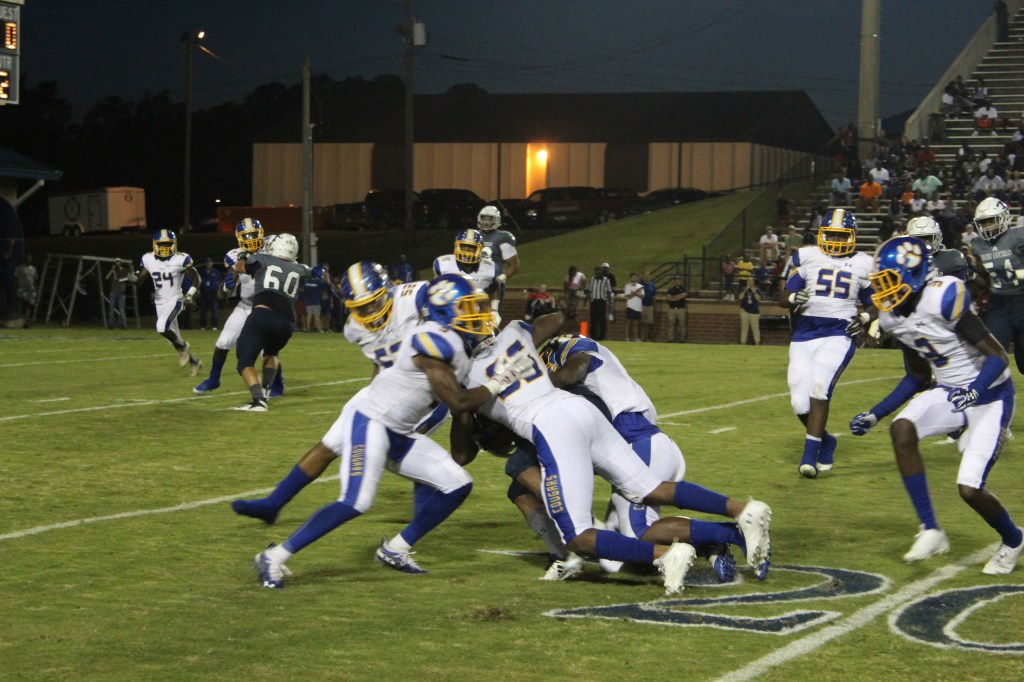 TIFTON- The Crisp County Cougars renewed an old rivalry from years past when they traveled down to Tifton to take on the 7-A Tift County Blue Devils on Friday night. Tift County scored a couple of early touchdowns to take control of the contest before winning by the final score of 42-0.

The Cougars kicked off to Tift at the start of the game and the Blue Devils went right to work at their own 27-yard line with their dangerous rushing attack. The first score of the night came on a short touchdown run by Tift running back, Danny Hill and the subsequent point after attempt put the Devils ahead 7-0 with about eight and a half minutes to go in the first quarter.

Tift County immediately got the ball back in Cougar territory on the following kickoff using a sneaky onside kick attempt, but the Cougar defense forced a quick punt after a Blue Devil holding call and a Nick Mercer pass knockdown at the line of scrimmage.

Crisp took over at their own six-yard line following the Tift County punt and had a good start to the drive before stalling out. The Blue Devil defensive line was flagged for a pre-snap penalty before the first play to give the Cougar offense some breathing room, and freshman quarterback, Jack Carter, then threw a short pass to Tubby Spivey for a quick first down. A block in the back pushed the Cougars back into a long yardage situation, and they were forced to punt on fourth down after another short pass from Carter and a run by Anthony Lewis.

A fumbled snap on the punt attempt set Tift up with the ball at the Cougar eight-yard line. Hill punched in another short touchdown run to put Tift up 14-0 at the 3:23 mark of the first quarter.

The Cougars had another promising start to the subsequent drive after Carter hit Sirad Bryant for a 10-yard pickup. AJ Lofton picked up a first down shortly after on a short run, but a sack by the Blue Devils on a third down play from the Crisp 33-yard line led to another Cougar punt.

The Cougars were quickly forced into another punting situation shortly after their defense had forced the turnover, but the Blue Devils hit Crisp punter, Bailey Barfield, after he had already kicked the ball away for a roughing the kicker call. The penalty was a brief bright spot, however, as Tift came away with an interception near midfield on the very next play.

Tift running back, Mike Jones, picked up some big yardage on the next drive, and capped the scoring possession off with a one-yard touchdown run for the 21-0 Blue Devil lead with just over five minutes left in the first half.

Jones added another one-yard touchdown run later in the half to give Tift County a 28-0 lead at the break.

The Cougars started the second half with possession of the football and they were able to move the ball early on with a couple of decent runs from Lewis, and completions from Carter to Gaige Little and Jynick Mainor. They were eventually forced to punt again, however, and Tift quickly capitalized with another score on an 85-yard touchdown pass from Patrick Felton to Tyler Ajiero for a 35-0 Tift lead.

The last score of the night came on a 29-yard run from Hill early in the fourth quarter, which put the final score at 42-0 in favor of the Blue Devils.

The Cougars are now 1-3 on the season after the loss to Tift County. Crisp will be back home on Friday night when they host South Gwinnett. 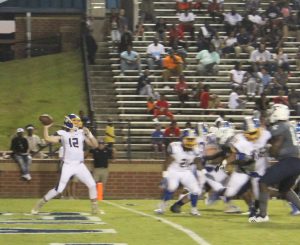 Crisp County freshman quarterback, Jack Carter, gets some time from his offensive line as he looks to connect with an open receiver against Tift County. 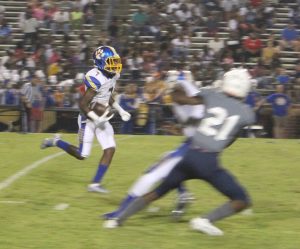 Crisp County’s Romel Shiloh gets a block from a teammate as he picks up yardage on a kickoff return during Friday night’s game.