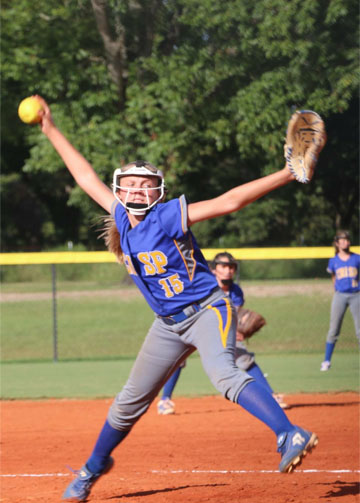 CORDELE- The Crisp County High School softball team avenged a road loss to Coffee County from earlier this season when they defeated the Lady Trojans 5-4 in Cordele on Monday afternoon. The well-matched teams played another highly competitive game that ended in the exact same score line as the Coffee County win in Douglas last month, but this time the Lady Cougars came out on top.

Crisp County’s number one pitcher, Rilee Duckworth, was in the circle again for the hosts and she started the game off with a perfect top of the first with the outs coming by way of two fly balls and one strikeout.

Crisp then immediately got the offense going in the bottom half of the first, striking for two big early runs.

Kirin Webb led off the bottom of the first inning with a base hit and then took second base shortly after. Later in the frame, Megan Bloodworth hit a one-out RBI single that scored Webb, and Jo Brady knocked in Bloodworth with a two-out RBI hit for the 2-0 Crisp County lead.

Coffee County took their first lead of the game in the top of the third with a big two out rally that featured a walk, a hit by pitch and a couple of RBI hits. Duckworth got a popup to Riley Blampied at short to end the inning and strand two Lady Trojans on base. Coffee led 3-2 entering the bottom of the third, but the Lady Cougars quickly tied the score back up.

Blampied hit a one-out double to right field to start the quick rally and Bloodworth picked up another single to give the Lady Cougars runners at first and third with one out in the frame. Brady followed with a productive at bat that ended with a sacrifice fly to center field, which allowed Blampied to score from third for the 3-3 score line entering the fourth inning.

Coffee County’s Emily Elisis led off the top of the fourth with a long fly ball to deep left field that appeared to be ticketed for an extra base hit off the fence, but Webb made a difficult catch up against the fence to rob the opportunity. Brady made a big defensive play of her own from her catcher spot on a pop up near the first base side of home plate for the second out of the inning, and Duckworth finished off the frame with a strikeout.

The Lady Trojans retook the lead at 4-3 in the top of the fifth on an RBI single by Kali Williams. Coffee had two runners on base with two outs after they scored the run, but another strikeout from Duckworth prevented anymore damage from being done and the Lady Cougars went back to work with the bats in the bottom half.

Blampied hit her second double of the game with one out and Bloodworth provided the run scoring hit before making it over to third base on a Coffee County error. Crisp then took advantage of the defensive mistake, as Brady followed up with an RBI groundout to score Bloodworth from third for the 5-4 lead.

Coffee had one more big scoring opportunity in the top of the sixth after getting two runners on base with two outs in the frame, but Macy West caught a fly ball in deep center field for the third out.

Duckworth pitched a three up, three down top of the seventh with two fly ball outs to Webb and a lineout to Ainslee Forsythe to finish the game off for the 5-4 win.

The Lady Cougars are now 12-2 on the season and will be on the road for a region double header at Worth County on Thursday starting at 4 p.m.

Olivia Bridges pitched two innings in the game for the Lady Cougars and struck out five batters. Reagan Bozeman also pitched an inning in the game and recorded three strikeouts.

In the CCMS batting lineup, Abby Eady hit an inside the park home run, Sara Ruth Raines recorded a single and a triple, Bozeman picked up a double and a single, and Bridges had a double.