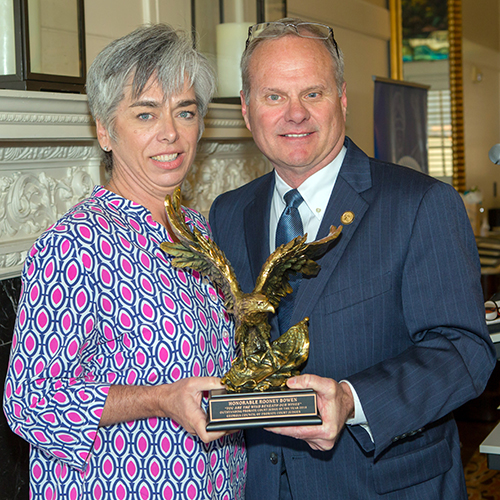 Dooly County Probate Judge Rooney Bowen was awarded the 2018 Outstanding Probate Judge from the Council of Probate Judges of Georgia. The award was presented to Judge Bowen by Judge Alice Padgett, who it the probate judge in Columbia County and served as the 2016-17 council president.

Bowen honored for work on

His traditional responsibilities – things like issuing wedding licenses, probating wills, managing vital records, and other duties – are enough to overwork even the most experienced and efficient county probate judge.

But that’s not all for Bowen. He is one of 88 probate judges in the state who also presides over county traffic court.

Nearly 900 misdemeanor traffic cases cross his bench each month. Those cases mean more than a speeding ticket or a DUI case to Bowen, though. They also represent opportunities to prevent first-time non-violent offenders from losing their livelihoods, save taxpayer money spent on keeping those offenders in jail longer than necessary, and ultimately streamline the criminal justice system.

“We did a lot of work through the Council of Probate Court Judges to try to come up with new ways to address the way bond is set for misdemeanor traffic violations,” said Bowen, who is the council’s immediate past president.

In the past, traffic violators who needed to be processed in cases where they could not post a bond were required to stay in the jail before they could appear before the probate judge. All violators are entitled to appear before a judicial officer for a first appearance hearing within 48 hours, Bowen said, adding that this is a constitutional right whether there is a preset bond schedule at the local law enforcement facility or not.

“In Dooly County I have a standing 48-hour bond order. If a person is held for longer than 48 hours on a new misdemeanor traffic violation, then he or she must be released on their own recognizance,” Bowen said.

Bowen said when he first implemented the policy there were concerns that traffic violators who are released on their own recognizance would fail to appear before his court to answer the charges — a practice commonly known as “jumping bail.” So far that’s been mostly a non-issue, Bowen said.

“Since I initiated this program at the beginning of the year, we’ve had only two people jump bail, and we were able to find those people and bring them before the court pretty easily,” he said. “So far [the 48-hour bond order] seems to be working well.”

Along with new policies on how bond is handled for misdemeanor traffic violators, Bowen also initiated a training program for probate judges who hear DUI and other traffic cases. The mandatory program provides 60 additional hours of training to probate judges who also preside over their local traffic courts so that they will be knowledgeable of best standards and practices and be able to improve workflow in their courts.

The training program has been hailed by law enforcement professionals and policy experts as a great move to ensure the integrity of the probate court system. The state’s Council of Probate Court Judges recently honored Bowen as Georgia’s Outstanding Probate Judge for 2018.

“Judge Bowen has worked diligently to help educate and improve the caliber of judges in the entire state probate court system. We just completed our first training program earlier this month and a lot of judges who didn’t participate have called wanting to review the documents that were distributed in that program” said Bibb County Probate Judge Sarah Harris, who is the current president of the state council.

“He has raised the bar for all of Georgia’s probate judges,” Harris said. “We have to improve the standards to which we hold ourselves, and Judge Bowen has served as a driving force for all of his colleagues to do just that.”