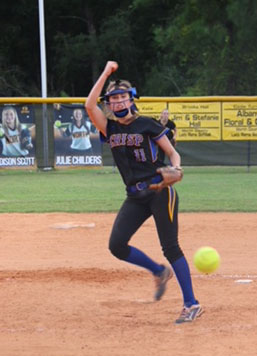 CCHS pitcher, Rilee Duckworth, releases a pitch during one of Thursday’s wins over Worth County.

SYLVESTER- The Crisp County softball Lady Cougars made the short trip over to Sylvester on Thursday to take on the defending region 1-AAA champions, the Worth County Lady Rams. Crisp County just held on to a 4-3 win in game one of the afternoon before running away with the second game 14-0.

In game one, the two teams were scoreless up until the top of the fourth inning when Crisp County took the first lead of the game on a solo home run from Riley Blampied. Megan Bloodworth reached base on a walk later in the inning and Jo Brady followed with a single to put two on base with no outs, but the Lady Rams were able to get out of the inning without giving up another run.

Blampied then hit her second home run of the game in the top of the fifth after Kirin Webb had reached base on a single. The two run home run put the Lady Cougars up 3-0 going into the bottom of the fifth.

Crisp added one final big insurance run in the top of the seventh to get in front 4-0. Peyton Bozeman reached base to lead off the inning after drawing a walk, and Shelbi Cobb moved her into scoring position using a sacrifice bunt. Webb picked up another single in the subsequent at bat to give the Lady Cougars runners at first and third base with one out in the frame. Bozeman ended up scoring shortly after on a wild pitch for the fourth Crisp County run of the game.

Worth County fought back to make it a close game in the bottom half of the seventh. The first two batters of the inning reached base for the Lady Rams, and Brooke Zinker came up with a one-out three-run homer to left field to cut the Crisp County lead down to one run. A strikeout by Duckworth followed by a fly out to Webb in left sealed the 4-3 win for the Lady Cougars in game one.

Blampied’s two homers led the way for the Crisp County batting lineup, while Webb had three hits in four at bats.

Crisp County took a four-inning run-rule victory in game two by a final score of 14-0.

The Lady Cougars picked up the first two runs of the game in the top of the first on an RBI groundout by Bloodworth that sent Webb home, and an RBI single from Brady that scored Blampied.

Crisp then added five more runs in the top of the second. Olivia Taylor opened the frame with a leadoff double before making it over to third on a groundout by Macy West. Rylee Little subsequently picked up an RBI on a sacrifice bunt attempt that led to a Worth County error. Cobb and Ainslee Forsythe both reached base after walks later in the inning to load up the bases, and Blampied then hit a grand slam to deep right field for her third home run of the day. The Lady Cougars led 7-0 after two innings.

Jo Brady later led off the top of the third inning with a solo home run to bring the lead out to 8-0 after three innings played.

The Lady Cougars stretched the lead out to 14 with six runs scored in the top of the fourth. Blampied and Bloodworth each reached base with two outs and Brady hit an RBI double to score Blampied. Taylor knocked in the next two runs with an RBI single to center field, and West kept the line moving with another single. Little came up with an RBI hit in the next at bat to make the score 13-0, and she later came around to score run number 14 on an error after Cobb put the ball in play on the infield.

Duckworth added another win to her record after pitching three innings, conceding just one hit to the Lady Rams. Peyton Adkins entered the game in the bottom of the fourth and got the final three outs to preserve the shutout win.

Blampied led the team in RBIs in the game with the four on her grand slam. Little and Brady each finished the contest with three RBIs, while Taylor finished with two and Bloodworth had one.

All stats were provided by the GameChanger app.

The Lady Cougars are now 14-2 on the season with a 5-0 record in region play to this point. Next up for Crisp is a home game against Perry High School (8-9) on Monday at 6 p.m.