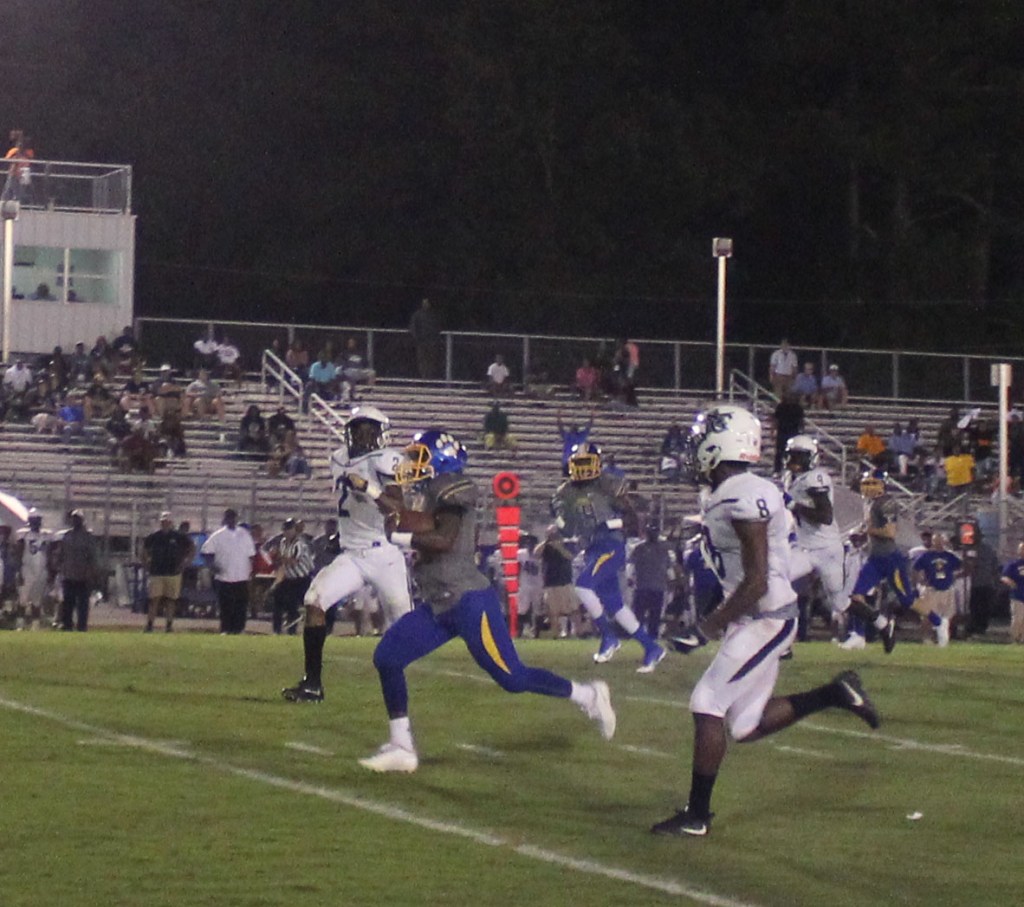 AJ Lofton bursts into the South Gwinnett secondary during one of his big runs on Friday night.

CORDELE- The Crisp County Cougars put an end to their three game losing streak on Friday night with a 21-6 home victory over the 7-A South Gwinnett Comets. The Cougar defense put in a big performance on the night, which included creating a handful of turnovers, two of them resulting in defensive scores.

South Gwinnett kicked off to the Cougars to open up the game, and Tubby Spivey put in a good return out to the Comet 45-yard line. An offside penalty on South Gwinnett followed by a short run from AJ Lofton got the Cougars inside the Comet 40-yard line, but they were eventually held to a punt after a penalty forced the drive to stall out. Crisp punter, Bailey Barfield subsequently sent the kick down inside the Comet five-yard line, which set up the first score of the game.

Two plays after the punt, South Gwinnett’s quarterback saw a wayward snap sail into the end zone, and Sirad Bryant was quickest to the ball for the fumble recovery touchdown for the first points of the night. Connor Richmond made the point after attempt to put the Cougars ahead 7-0 just over two minutes into the opening quarter.

South Gwinnett was set up at their own 13-yard line after the ensuing kickoff, and the Cougar defense quickly held them to a three and out to force a punt.

Crisp took over control of the ball near the Comet 45-yard line following the punt. Lofton picked up 20 yards on a run three plays later to get the Cougars down inside the South Gwinnett 30-yard line, but the very next play resulted in an interception by the Comets.

The South Gwinnett offense then put together a long 13-play 90-yard drive which resulted in their first score of the night on a nine-yard touchdown pass. The point after try was unsuccessful as the snap sailed over the holder and into the backfield, so Crisp maintained the lead 7-6 at the 4:06 mark of the first quarter.

The Comets tried for an unexpected onside kick attempt and kicked the ball short on the ensuing kickoff, but Dontavius McCloud fell on top of the ball to make sure the Cougar offense had their next possession.

A quick three and out forced Crisp to kick the ball back to South Gwinnett and the Comets got a good return out near midfield. The Comets were forced to kick the ball right back to the Cougars on the ensuing drive, however, as Jayren Fox made a big tackle behind the line on the third down play to force a punt.

The Cougar offense received the ball at the 17-yard line and Lofton finished off a 14-yard run as time expired in the first quarter, but South Gwinnett forced Crisp into another punting situation just four plays later.

Bryant came up with another big play for the Cougar defense to stop the next South Gwinnett drive as he pulled in an interception to force another to force a turnover at the 8:34 mark in the second quarter. The Cougars then drove down into South Gwinnett territory after a couple of short gains from Marquise Palmer, followed by a 40-yard run by Lofton. Richmond came out to attempt a field goal from about 44 yards out later in the drive but the kick went just wide of the goalpost, so South Gwinnett took over possession of the ball.

The Cougar defense forced another punt on the very next drive, and their offense went back to work on another long drive down inside Comet territory. The key plays on the possession came on a nine-yard pass from Jack Carter to Tubby Spivey, runs of 18 and 13 yards from Lofton, and a pass from Lofton to Spivey for a 20-yard pickup. The drive eventually resulted in an interception by South Gwinnett. The Comets ran out the final minute of the first half, and the Cougars led 7-6 at the break.

South Gwinnett received the second half kickoff, and the Cougar defense again held them to a quick punt. Perici Gaines, Camion Snead and Damion Cross all led the charge with important tackles on the drive for the Cougars and Jaylin Epps made the fair catch on the ensuing punt at the Crisp 30-yard line.

The teams swapped punts over the next four possessions before the Comets put together a drive down into Cougar territory with around five minutes to go in the third quarter.

A high snap once again hurt the Comets, however, as it set them up for a 34-yard field goal try on fourth and long. Some good pressure from the Crisp County field goal block team helped force the South Gwinnett kicker to miss the attempt and the Cougar offense took over at their own 20-yard line.

Lofton again made a couple of decent pickups with his legs, and a personal foul penalty pushed the Cougars out near midfield. From there, Lofton threw a pass over the middle to receiver, Jordan Fawkes, who subsequently broke free for what ended up being a 44-yard pickup to set up first and goal for Crisp County at the three-yard line. Palmer scored on a short touchdown run on the very next play, and Richmond’s extra point brought the Crisp lead out to 14-6 with 1:23 to play in the third quarter.

South Gwinnett got the ball out near midfield on their next drive, but the Cougars came up with yet another big play on defense for the final touchdown of the night. The Comet quarterback attempted a short dump off pass in the flats on the play, but the receiver could not keep possession of the ball as Fox knocked it loose, and Ahdarrious Gee scooped up the loose ball and took it into the end zone from around 30 yards out. Richmond knocked through another extra point to put the Cougars up 21-6 with 5:48 to go in the game.

South Gwinnett fumbled on the next possession and Jaquan Bass recovered the ball to give the Cougar offense a chance to run out some clock.

The ensuing Crisp drive ended in a missed field goal attempt from around 33-yards out after a pre-snap penalty by the Comets wiped off the first attempt, which Richmond had previously converted.

The Comet offense took over with about three and a half minutes on the clock, but the drive ended in another Cougar interception in the end zone, this time by Spivey. Chirs Paul also had a sack on the drive for the Cougar defense to help seal the game. Crisp County ran out the remaining six seconds of the clock in victory formation for the 21-6 win.

“I thought the defense played really well,” said Crisp County Head Coach Brad Harber. “I think that we had too many knuckle-head penalties on both sides of the ball, and we still have a lot of improvement to do. I am really proud of the way the fans came out and supported us. The coaching staff and the players worked hard all week long to get us off this little losing streak,” he added.

Crisp now has a record of 2-3 at the halfway mark of the regular season. The Cougars will travel to Bainbidge (2-2) on Friday night for their next game. 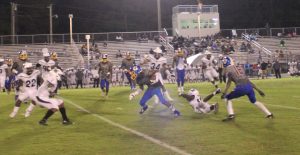 Tubby Spivey breaks a tackle and picks up yards after making a catch vs South Gwinnett.