Memories of a father 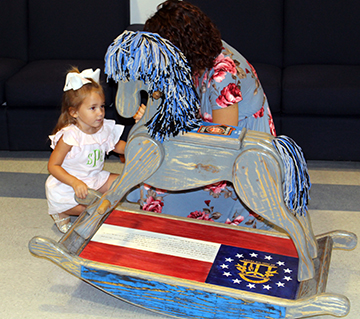 Savannah Parker, daughter of the late GSP trooper Tyler Parker, was presented with a custom-made rocking horse on Monday. She celebrated her third birthday on Tuesday, and Wednesday marked the sixth month since Tyler was killed in an off-duty traffic accident.

Georgia State Patrol Trooper Tyler Parker lost his life on March 19 in an off-duty automobile accident. He was heading east on Arabi-Warwick Road along with his 2-year-old daughter Savannah when his personal vehicle hydroplaned and left the roadway. Savannah sustained serious injuries in the wreck but has recovered.

On Monday, members of the Parker family along with troopers from Georgia State Patrol Post 30 met to celebrate Tyler’s life and career – and to have an early birthday party for Savannah, who turned three on Tuesday.

Shannon and Andrea Parson, who hand-build rocking horses for the children of law enforcement officers who have passed away, presented Savannah and her mom Christy with a rocking horse that features the state patrol logo and the state flag with a personalized message.

Afterwards, GSP Post 30 Commander Jon Posey presented mementos of Parker’s work with the State Patrol to both Christy and Savannah as well as to his parents, Gary and Tina Parker.

“The feeling of loss is still as raw as if it just happened yesterday,” said Mr. Parker, “but we’re overwhelmed by the continued support from everyone.”

Mr. Parker, who also served as a trooper with the Georgia State Patrol, expressed the family’s gratitude to Tyler’s law enforcement colleagues and to the Parsons for Savannah’s rocking horse.

“We appreciate you opening your hearts and giving us your support,” Parker said.

After the presentations, Parker said he hopes Tyler will be remembered by both family members and fellow law enforcement officers for many years to come.

“He was a great son and dad, and he was probably an even better trooper,” he said.