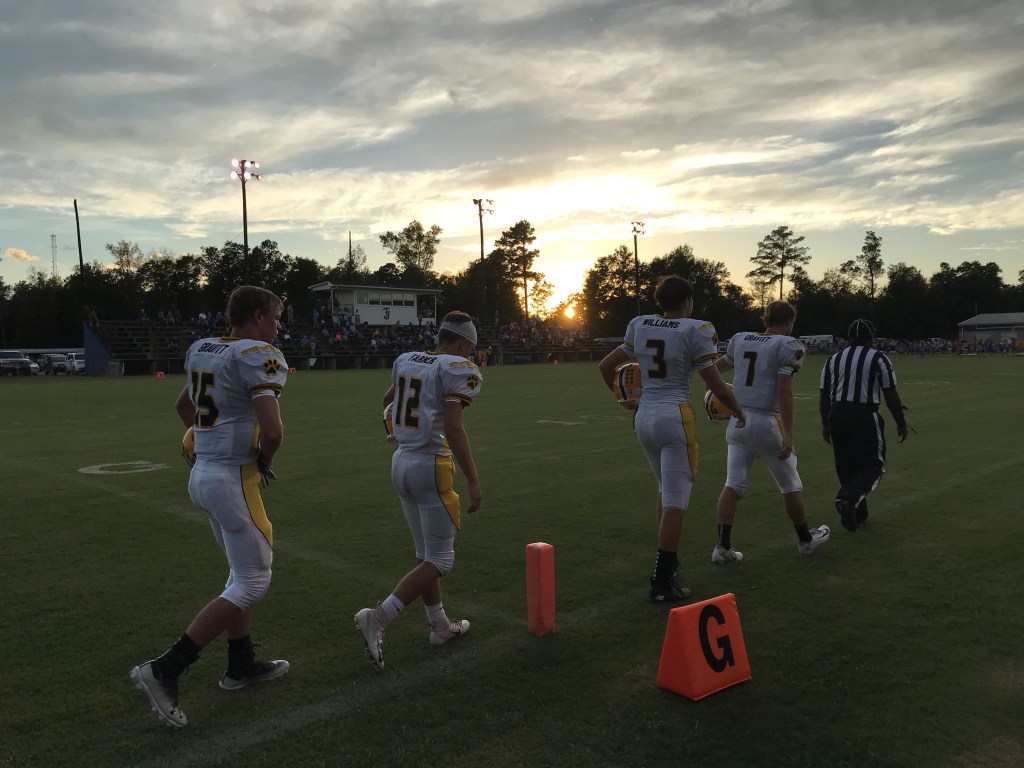 LOUISVILLE, Ga.- For their second away game of the season the Crisp Academy Wildcats faced the Thomas Jefferson Jaguars this past Friday night. While CA held the lead for most of the game, in a turn of events, the Jaguars came out on top 18-16.

The Wildcats won the coin toss and opted to receive the ball for the opening kickoff, and the Jaguars kicked off to Crisp’s 36-yard line. The first two and a half minutes of the game saw the ball switch back and forth between the competing teams. Early highlights for Crisp Academy were a 20-yard pass from quarterback Griffin Gravitt to Trey Williams and a 46-yard pass from Gravitt to Noah Mercer.

With 3:23 left in the first quarter, the ball returned to Thomas Jefferson after an incomplete pass on Crisp’s 20-yard line. On the fourth down play, a Jaguar error caused the ball to go out of bounds through the back of the end zone, giving Crisp Academy a safety and the lead at 2-0.

The end of the first quarter was marked by a 28-yard touchdown run by Baylor Pless that was called back because of a penalty. The Wildcats went into the second quarter with possession, but an interception turned the ball over to Thomas Jefferson with 11:06 to go in the second quarter. After a nearly four minute long drive, the Jaguars scored the first official touchdown of the night for a 6-2 score.

The ensuing return gave Crisp a start at their own 39-yard line. Dede Lawrence then earned a first down on a 10-yard run. A few plays later, Gravitt saved the Wildcats from a turnover with his 13-yard run on a fourth down play.

With 5:57 left in the first half, the game turned grim for the Wildcats as Gravitt faced an injury that took him out of the game. Immediately upon replacement, Mercer threw a 15-yard pass to Dylan Farmer. From Jefferson Academy’s 12-yard line, Mercer threw another pass for nine yards to Garrett Gravitt, and Lawrence then picked up the first Crisp Academy touchdown of the night for an 8-6 Wildcat lead.

The Jaguars gained some first downs on the next possession, but the drive was cut short with two brutal tackles by Williams and an incomplete pass.

The Wildcats’ next drive looked like it would be a short one too, except Crisp faked a punt and tossed the ball to Pless for a first down. A 34-yard pass play, followed by a 17-yard completion from Mercer to Farmer set up a short pass to Pless for the next CA touchdown. The first half ended with a 16-6 CA lead after a successful conversion run by Farmer.

The Jaguars started the second half with possession but only kept the ball for a short time before they turned it over to CA.

On the first play of CA’s next drive, Mercer passed to Pless for 12 yards. But ultimately, the Wildcats punted to the Jaguars on the possession.

About four minutes later, the Jaguars were forced to punt back to Crisp Academy, but shortly into Crisp’s drive the ball was intercepted by TJA at the 1:57 mark of the third quarter.

The Jaguar drive extended into the fourth quarter, and within the first 30 seconds of play in the period, the Jaguars picked up a touchdown to make the score 16-12 in favor of CA.

After the return, TJA recovered a fumble by Crisp, leading to another Jaguar touchdown. Halfway into the fourth, Jefferson Academy led 18-16, which ended up being the final score of the night. The rest of the quarter consisted merely of possession switching back and forth between the teams.

Crisp Academy, now 2-2 on the season, is off this week and will be using the extra time to prepare for their next matchup, in which they will play Friday, September 28, on the road against Flint River Academy.