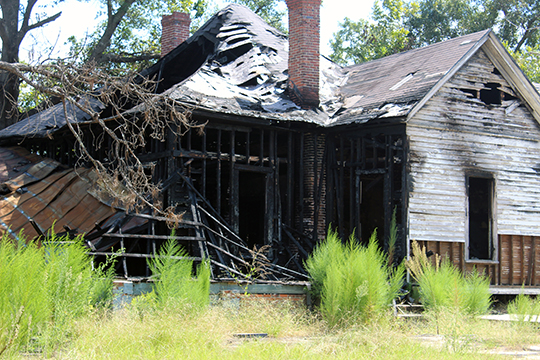 City officials moved one step closer to clearing three lots, including this one at 203 West 15th Avenue, of dangerous structures and debris at Tuesday’s city commission meeting.

Progress was the order of the day at Tuesday’s Cordele City Commission meeting.

Commissioners had a full agenda with items that varied from new sidewalk construction to urban renewal to the clearing of dilapidated residential properties.

The panel approved a second reading of orders for three properties to be cleared of dangerous structures and debris:

Once the minutes from Tuesday’s meeting are approved at the commission’s next business meeting, the public works department will be notified and add the properties to be cleared to their work schedule.

In other business, City Manager Edward Beach told commissioners they will begin to see tangible progress on the construction of sidewalks planned for 8th, 10th, and 13th streets south of 24th Avenue. The project has been in the planning stages for the last several months, but preparatory work is now beginning in advance of the actual first day of construction.

“The official start date for the construction of the project is now set for Oct. 9,” Beach said. “However you will start to see a lot of preliminary work going on there. We’ll be doing utility relocates, we’ll do surveying, a lot of project layout, and that will begin this week.”

Beach expressed praise for the many city staffers who have been involved in the project, noting that officials with the Georgia Department of Transportation were pleased with the city’s level of preparation at their final consultation session.

“One of the DOT consultants said she expected the meeting to last at least three hours and we were able to wrap it up in an hour,” Beach said.

Beach also touched on the progress being made on the sidewalk construction project for Pecan Street. He said the project is still in the planning phase, but those plans are critical to ensure proper funding is secured.

Commissioner Jeanie Bartee asked Beach about a timeline for completion on the Pecan Street sidewalks.

“It’s been a long time coming,” Bartee said, “and we need that as quickly as possible.”

Among other things, commissioners passed a handful of measures that included a unanimous agreement to close the portion of Byrd’s Mill Road that falls inside the city limits and approval of various fall events in the downtown area.