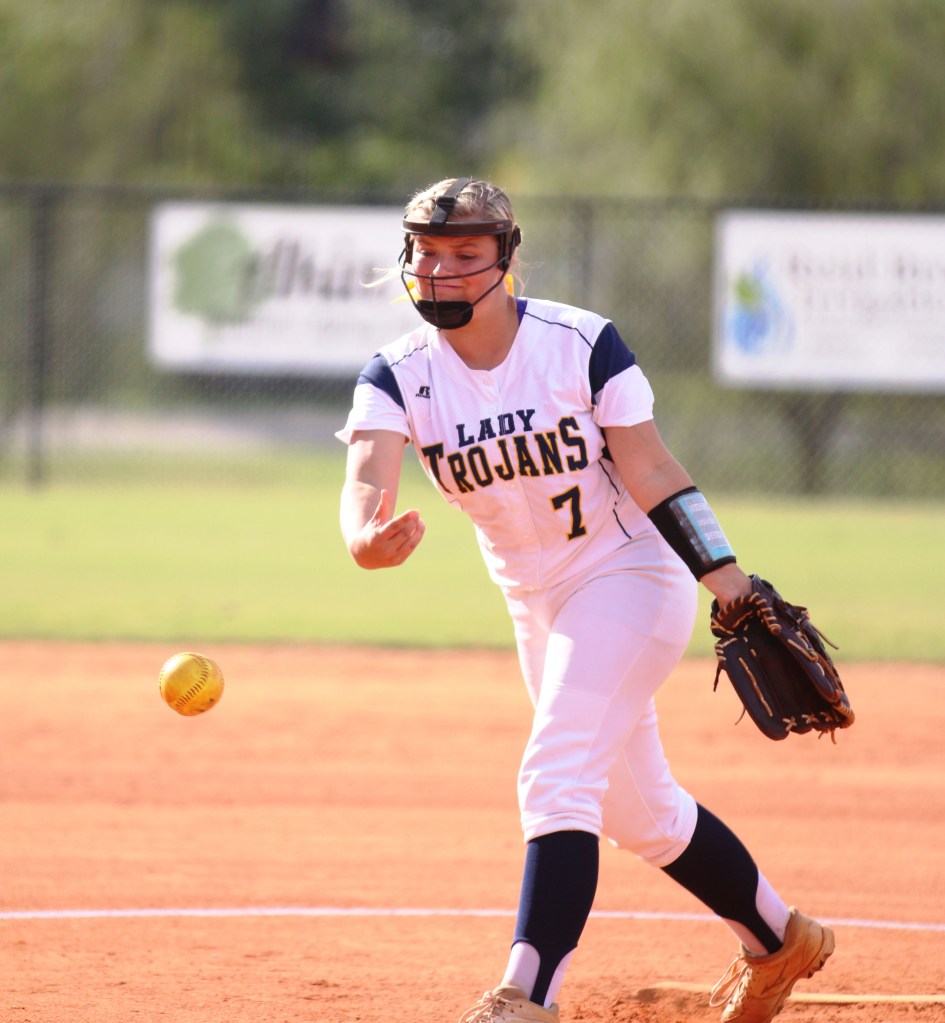 Fullington Academy’s Maggie Rogers releases a pitch during a game from earlier this month. Photo by Bonnie Hauesler.

Fullington hosted SGA on Monday (September 17) afternoon in what ended up being a wild contest that saw the Lady Trojans prevail with a late comeback.

Parker Wall led the Lady Trojans in the batting lineup in the game with three hits (two singles and a double) in three at bats with two runs batted in, a stolen base and a run scored. Sarah Kate Wall finished two for four with two RBIs and Marley Jones was one for three with two runs scored.

Ella McGalliard picked up the win for Fullington with four and a third shutout innings pitched in relief of Sarah Kate Wall.

Fullington picked up a road region win on Tuesday afternoon against the Georgia Christian Lady Generals. The game ended in a run-rule 16-1 win for the Lady Trojans after just three innings played.

Parker Wall had another productive game for the Lady Trojans, picking up one hit, three RBIs and two runs scored in three at bats. Marianna Jones was the team leader in RBIs in the contest with four. Camille Tyndal was the leading run scorer for Fullington in the game with three. McGalliard, Scout Weesner and Maddy McLeod each had an RBI in the contest, while Emma Sanders and Claire Thompson each scored two runs.

Maggie Rogers picked up the win in the circle for Fullington with three innings pitched, one earned run on two hits and five strikeouts.

The Lady Trojans were defeated in Wednesday’s region contest against Citizens Christian Academy in a close one.

The second inning run came on an RBI fielder’s choice groundout from Lauren Rucker that allowed Parker Wall to tie the score at 1-1. Marley Jones and Sarah Kate Wall scored the fifth inning runs after an RBI single from McGalliard. Fullington led 3-1 after the fifth inning.

CCA retook the lead in the top of the seventh on a three run home run, and they were able to hold on for a 4-3 win from there.

The Lady Trojans then hosted Community Christian for a region double header on Thursday afternoon.

Fullington won game one of the double header 16-1 in just three innings with key contributions from all over the lineup.

Fullington finished off the double-header sweep of Community Christian with a 12-0 victory in game two.